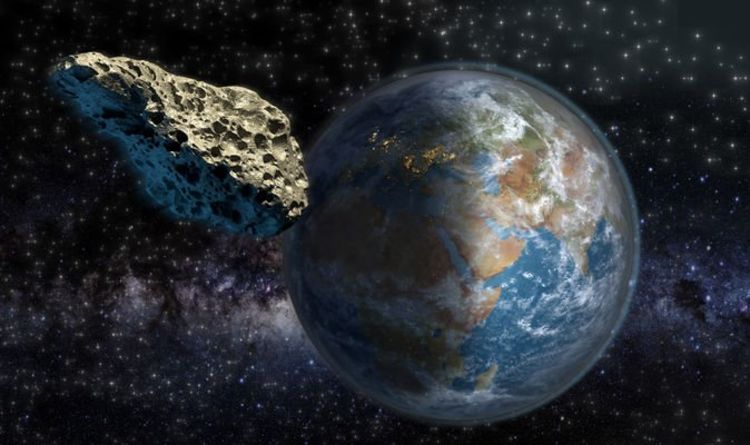 NASA‘s Centre for Near Earth Object Studies (CNEOS) has identified the trio of asteroids heading towards the planet before the end of this month as 2016 PD1, 2002 JR100 and 2019 OU1. 2016 PD1 is currently travelling at a speed of 13,000mph and has an estimated diameter of 360ft. CNEOS said the approaching asteroid is expected to fly close to Earth on August 26 at 9.35am.

2016 PD1 is classified by CNEOS as an Amor asteroid.

Like other asteroids of its kind, these do not cross the Earth’s orbit, with most Amor crossing the orbit of Mars.

But it could still be deemed dangerous, as according to The International Astronomical Union Minor Planet Centre, it must come within 0.05 AU of the Earth’s orbit to be considered a potentially hazardous asteroid (PHA).

NASA asteroid news: A trio of asteroids are heading towards Earth over the next week (Image: GETTY)

But according to the CNEOS, this is travelling significantly faster at almost 18,800mph but is slightly smaller at 269ft long.

2002 JR100 is an Aten asteroid, whose orbits bring them into relative close proximity with the Earth.

As these types of asteroids posit the Sun, they often intersect the path of Earth as it approaches its farthest distance from the planet.

Aten asteroids are relatively few and between and account for just 7.4 percent of the known near-Earth asteroid population.

But the last of this trio of asteroids poses the biggest threat to impact with Earth.

DON’T MISS
Simulation shows God of Chaos would cause mega explosion [VIDEO]
Asteroid shock: How ‘Tokyo could be saved from being WIPED OUT’ [ANALYSIS]
Asteroid 2019 OK ‘near miss’ collision with Earth captured in video [VIDEO]

The asteroid has a diameter of around 525ft and is travelling towards our planet at a speed of 29,000mph.

But aside from the huge speed it is picking up, 2019 OU1 will also fly closest to Earth.

CNEOS has classified 2019 OU1 as an Apollo asteroid and like others from this group, fly around the Sun and Earth, occasionally intersecting with the orbit of the planet.

The most valuable asteroids in our solar system (Image: EXPRESS)

In December 2018, there 1,485 known Apollo asteroids, making the class the largest group of near-Earth objects.

From this, 1,648 were identified as potentially hazardous asteroids.

The latest trio of asteroids being focused on by NASA comes as the European Space Agency (ESA) targets Didymos, the twin asteroid, in a bid to deflect it from possible earthbound collision course.

The ESA will accompany the NASA DART spacecraft that will collide with the Sun’s rocky surface in an effort to discover if the asteroid can be deflected from its precarious movement around the Earth.

NASA asteroid news: The 2019 OU1 is as big as the Washington Monument (Image: GETTY)

Speaking of Europe’s contribution to an international planetary defence test, Astrophysicist Brian May said: “If we’re going to find out if it’s possible to deflect Didymos, it is going to be really, really hard. Aiming at a 160-metre-wide target across millions of kilometres of void.

“Could we stop an asteroid hitting planet Earth?

“But we humans have the benefit of knowledge and science on our side!”