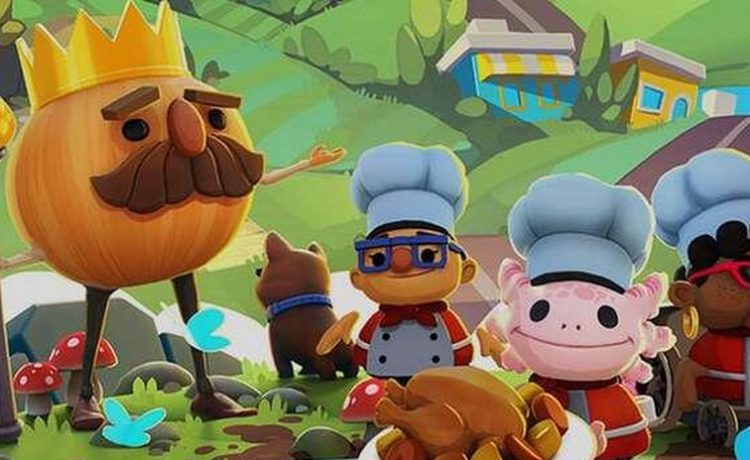 Every single Thursday for the last year  — from 8 p.m. until long after I’m asleep — my living room becomes a war zone, and video games are to blame.

It’s not my fault. I’m not playing. Not this time. I’m barely allowed in the vicinity.

And it’s not my kids’ fault either. Despite a newfound fondness for all things Minecraft, this madness typically occurs after their bedtime. My kids are usually fast asleep by 8 p.m.

No, this time it’s my wife. My 39-year-old wife and her war-ravaged collection of girlfriends. At least once a week they congregate en masse, huddled around my television, brows furrowed, communicating in a language I barely understand. They’re not playing Fortnite or Call of Duty Warzone or Valorant or any other game of the moment.

Overcooked is a popular cooperative game where up to four players manage the chaos of a restaurant kitchen. In Overcooked, players cook meals and serve them to score points. Score enough points and you get a coveted “3-star” rating. Overcooked 1 and 2 has sold millions of copies and won multiple awards. Despite hating what it does to my living room space every Thursday night without fail, I can’t help but respect it.

I also respect my wife and her friends who, for the better part of last year, have slowly been working through every single level in Overcooked 2 on Nintendo Switch, attempting to 3-star every single one of them. This game is crazy difficult. Getting 3-stars on some of the tougher later levels takes commitment, mental strength and — above all — careful planning.

Last Thursday I came home from the gym and decided to sit in on one of their sessions.

That’s Natalie. All three agree she’s probably the strongest player. When shit hits the fan, she tends to pick up the pieces.

“What cheese? Are you ready to serve? WE HAVE TO SERVE.”

That’s my wife. She’s sorta the default Overcooked leader. Together they have a Facebook chat group called “The OC Squad” where they talk strategy in advance of Thursday nights. Who’s chopping onions? Who’s washing the dishes? Who’s serving? Everything is meticulously planned. Nothing is left to chance.

“Which one of you FUCKING WHORES stole my cheese!”

That’s Natalie again. She doesn’t usually lose her temper. Later, after this level was finished, she apologised. (“Guys, I’m sorry for calling you fucking whores.”)

Video games. Am I right?

“Why haven’t you written a story about us yet?”

Caryn asks me this every week. I’ve always enjoyed writing about games my kids are playing, but I’ve been reluctant to talk about my wife’s OC Squad. Mainly because calling attention to it is to implicitly say, “Hey this is weird and different, right gang? A group of girls coming together to play video games?”

And, of course, nothing could be further from the truth. There’s nothing weird and different about this. Or at least there shouldn’t be. It’s totally awesome for a group of women to regularly catch up and play video games, even if it means I get kicked out of the living room every Thursday night.

Video games are both an industry and a culture simultaneously desperate for mainstream acceptance whilst being childishly protective of “gaming” as a “lifestyle” and an “identity.” You see that tension every time someone claims that women who play mobile games aren’t “real gamers” or every time game developers receive death threats for making women the main characters in big budget video games.

We all know it: Video games and video game culture — in a very open and visible way — has had long-standing, visceral issues with sexism. This has been obvious since money men decided to market games to boys in the ’80s. Since that point any sort of pushback on that status quo has triggered troubling, often violent, responses.

In that context, there’s something almost subversive about a group of women in their mid-to-late 30s getting together to play video games. It feels like a stronger testament to the mainstream appeal of video games than The Last of Us Part 2 getting a good review in The New York Times. These are women completely divorced from the poisonous discourse surrounding video games. Women who don’t have Twitter accounts; women who couldn’t pick Ninja out of a line-up and have zero idea what Gamergate is. They’re just here to 3-star Overcooked levels.

Even if someone accidentally gets called a “fucking whore” every once in a while.

READ  Tom Holland Explains How The Uncharted Movie Will Be Different From The Video Games - Happy Gamer
Share on FacebookShare on TwitterShare on PinterestShare on Reddit
newsgrooveJuly 22, 2020