NewsGroove Uk
NewsGroove Uk > Sports > 'My heart is OK, I'm still alive' – five things you may have missed in the EFL
Sports

'My heart is OK, I'm still alive' – five things you may have missed in the EFL 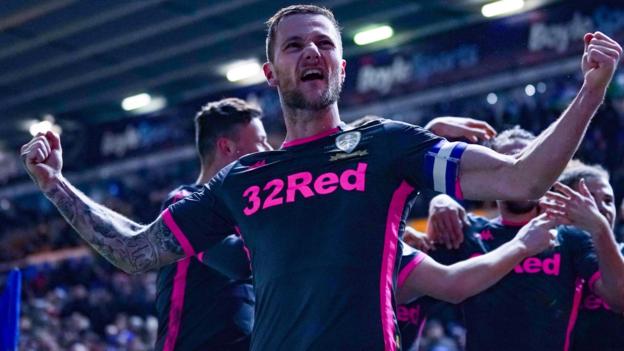 The words of Leeds United head coach Marcelo Bielsa are probably similar, but a lot cleaner, to the ones spoken by a few thousand of the club’s fans after their nine-goal thriller with Birmingham City on this decade’s final day of English Football League matches.

Leeds saved one of the very best games of the last 10 years in the EFL until last, with a performance just about good enough to ensure they’ll start 2020 at the Championship summit.

Here are five things you may have missed in the EFL on Sunday, starting with the chaos at St Andrew’s.

Two goals inside 21 minutes had it looking as though Leeds would be ending the decade with an easy win. But Leeds rarely do things simply.

Birmingham struck either side of half-time to bring the game level, before a stunning Luke Ayling volley put Bielsa’s side back in front.

An 83rd-minute goalkeeping howler from Kiko Casilla allowed Jeremy Bela to equalise, but straight from kick-off Stuart Dallas fired in for Leeds.

Thanks to West Bromwich Albion being behind at home to Middlesbrough, Leeds were going top – so dig in and hold on to your lead, right? Wrong.

They poured forward in search of a fifth and, in the final minute, Birmingham counter-attacked. Lukas Jutkiewicz scored. 4-4. It was a goal that sent Blues fans into a third chorus of “Leeds are falling apart again”.

But Bielsa’s men were not to be outdone.

The clock ticked beyond 94 minutes. The home side couldn’t clear it. Ayling drove a ball across the six-yard box and Wes Harding turned into his own goal, prompting the away end to descend into utter pandemonium.

And so Leeds United end the decade like only they know how – and replace the Baggies as Championship leaders.

“After 2-2 the game was everywhere – box to box, keeper to keeper,” said Bielsa.

“It was like we were our opposite. We usually need lots of chances to score but we were efficient. We usually have great safety in defence but we weren’t in a good position to avoid goals. I didn’t expect this.”

To be fair, Marcelo, I don’t think anyone did.

Teams leading the way in each tier of the EFL found life tough in the final round of matches this year.

West Brom looked like they would end 2019 at the summit of the Championship, going into their home game against Middlesbrough on a 14-match unbeaten run.

But Daniel Ayala headed the visitors in front before half-time and Ashley Fletcher’s dipping long-range strike in injury time handed the Baggies their first defeat at The Hawthorns since February as Slaven Bilic’s side slipped to second behind Leeds – who they face on New Year’s Day.

Wycombe, meanwhile, are really feeling the heat at the top of League One.

Wanderers had a seven-point lead over second place heading into their match at Oxford United on 21 December, but defeat there has sparked a run of three straight losses.

Gareth Ainsworth’s side were beaten 2-0 at Portsmouth on Boxing Day and then conceded four at home to Coventry City on Sunday, cutting their lead at the top to four points.

The Irishman had netted 15 goals in that spell but drew a blank as the Robins had their lead cut to two points by closest challengers Exeter City.

Propping up the EFL

Turn the clock back 10 years and the man barking out instructions from the Stevenage dugout was the same one urging his players not to get too deep in the closing moments of the club’s League Two match with Plymouth Argyle on Sunday.

Graham Westley is back at Broadhall Way for a fourth spell and is ending this decade with a very different set of circumstances to those he was starting 2010 with.

The concession of a 96th-minute winner at Home Park means his side are bottom of League Two, one place higher than when they saw out the previous decade at the top of the National League.

So in 10 years, during which the Boro have won promotion twice, been relegated once, and been managed by former England women’s boss Mark Sampson and England legend Teddy Sheringham, they’re back to what they know works.

At least he gets to start one place higher in the football pyramid.

Walsall rewarded a section of their supporters with free tickets to their final home match of the year against Carlisle United.

The 107 hardy souls who followed the League Two outfit to an FA Cup first-round replay at non-league Darlington on a Wednesday in November were handed free entry to the Banks’s Stadium.

The Saddlers were on a six-match unbeaten run, winning three of those games, heading into the meeting with the Cumbrians.

It looked like that run would continue as Elijah Adebayo cancelled out Nathan Thomas’ opening goal for the visitors – although Walsall defender James Clarke was sent off with 13 minutes left.

But then Harry McKirdy popped up in the 94th minute to loop in a header and win it for Carlisle, breaking the hearts of the home fans (free ticket or not) in the process.

There was drama to end the decade at Highbury, despite Fleetwood Town and Bristol Rovers playing out a 0-0 draw in League One,

There was a flashpoint in the second half when Ched Evans thought he had scored to put the Cod Army ahead in the 69th minute.

The goal was given by referee Paul Marsden and the players were heading back for kick-off, only for the strike to be ruled out for offside after a delayed flag from the assistant, with Paddy Madden the alleged guilty party.

Cue uproar from the Fleetwood bench, leading to manager Joey Barton being sent off three minutes later for his part in the protests.

“Having watched the replay back from multiple angles, what he said he disallowed the goal for and what has transpired are two totally different things,” Barton told BBC Radio Lancashire.

“It doesn’t help us now and I am probably going to get a fine from the FA and have to sit in the stands for a game.

“I am just passionate, and care about my team winning games.”

As a new decade dawns, it is good to know some things never change.