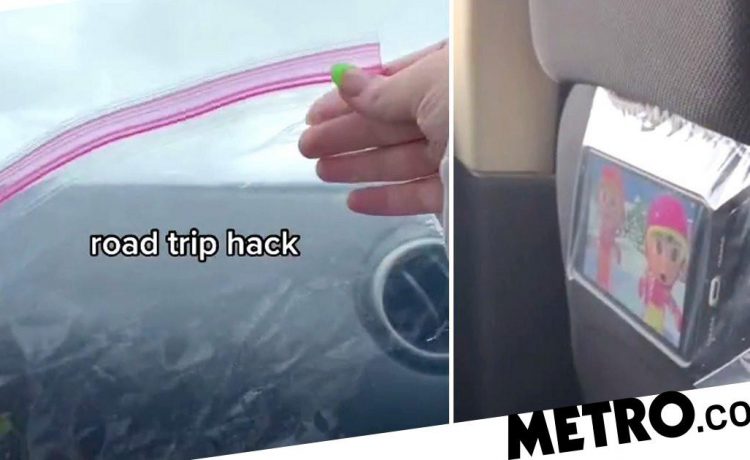 Keeping kids quiet on a long journey can be a bit of a task.

For some parents, the answer is screen time – but little ones can get fed up holding a tablet, or end up pressing all sorts of buttons.

But one mum has a simple hack to keep the device safe.

Whitney Leavitt posted a video on TikTok showing her idea.

Using a plastic sandwich bag, she is able to put her phone inside with her child’s favourite show playing and hang it from the head rest in front.

She removed the headrest and punches holes in the bag before reattaching so the bag stays there.

It’s important to use a see through bag without any writing so your child can see the screen through the bag.

She shows her little one looking mesmerized by the show.

Over 14 million people watched the video, which is still being shared weeks after she posted it.

Some, however, did criticise her for using screen time to keep her child happy – but others jumped to her defence.

One said: ‘Y’all say no iPads or tablets until you have kids. Trust me. 14 hour car rides and y’all want baby to cry it out? Nah we gotta be smarter than that.’

Another added: ‘Don’t judge others just because something else works for you.’

Some gave more tips to make the bag easier to use if you need to get your phone out, or want to switch to something else.

One said: ‘If you put the back sideways you can easily get your phone out without having to totally remove.’

Many parents said they loved the idea and would be trying it out.

‘Omg and I’ve been trying to think of something to hand mine on for baby, tyty,’ one mum wrote.

Another said: ‘I’m definitely going to do this.’

Obviously, while not ideal to use a disposable sandwich bag, you can reuse the same one over and over for this trick – just keep it stored in the car for future road trips.


MORE : Mum shares simple hack to get oil stains out of clothes instantly


MORE : Woman reveals hack to make changing a bin bag easier by putting it on ‘like a hat’

READ  Spare a thought for these poor parents as their mischievous kids fall into the loo, get stuck in a shop freezer and doodle on the dog
Share on FacebookShare on TwitterShare on PinterestShare on Reddit
newsgrooveMay 27, 2021