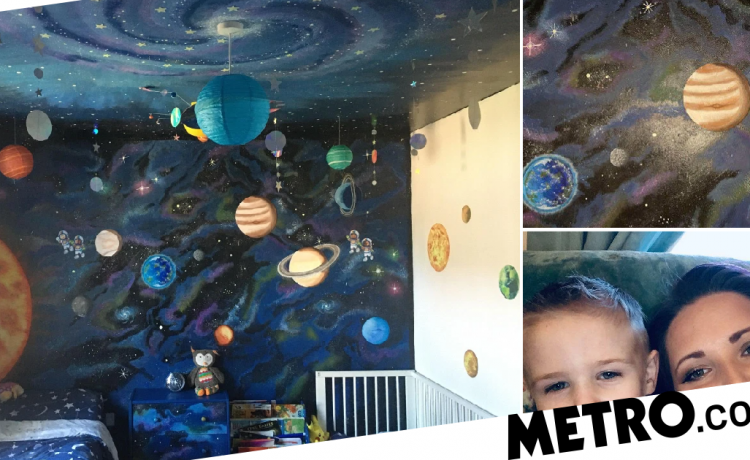 Jennyfer Williamson wanted to create a space-themed room for her six-year-old son Leo – but was on a budget.

The mum managed to decorate with toothbrushes and kitchen plates and ended up spending just £67.99 for the design, which took 14 days to complete.

Jennyfer, 29, from Scotland, came up with the design herself and used acrylic paints, black gloss and chalk paint to design the walls – but for tools, she sourced items from her house.

‘My son is obsessed with space and has been since the day he was born, Jennyfer said.

‘He really really wanted a space room and kept saying, “mummy, can we fly to space?” so I decided to bring space to him.

‘I used brushes, a toothbrush, sponges, glitter spray and gloss spray to complete the design.

‘The toothbrush was used for the flex of the stars and the acrylic paints were used to create the colours of my planets.

‘I then used a sponge for the smoky back background.’

She shared the pictures on social media and others loved the transformation.

Jennyfer’s post has racked up over 1,100 likes and hundreds of comments so far – even impressing a real astronomer.

Another user added: ‘Wow, my husband is an astronomer and he loved this and the detail you went into. Well done.’

‘Out of this world, fantastic,’ another person added.

Leon loves his new room and it’s helped him deal with night terrors that were keeping him awake.

Jennyfer said: ‘He can’t wait to go to bed at night and he has been sleeping so much better since it’s been done and we have had no night terrors, he is literally over the moon.

‘He tells everyone about his room, he absolutely loves it and so do I, he is one happy little boy.

‘It really is out of this world and it’s so much better in person.’

READ  Pregnancy warning mandatory on alcoholic beverages within three years
Share on FacebookShare on TwitterShare on PinterestShare on Reddit
newsgrooveApril 5, 2021