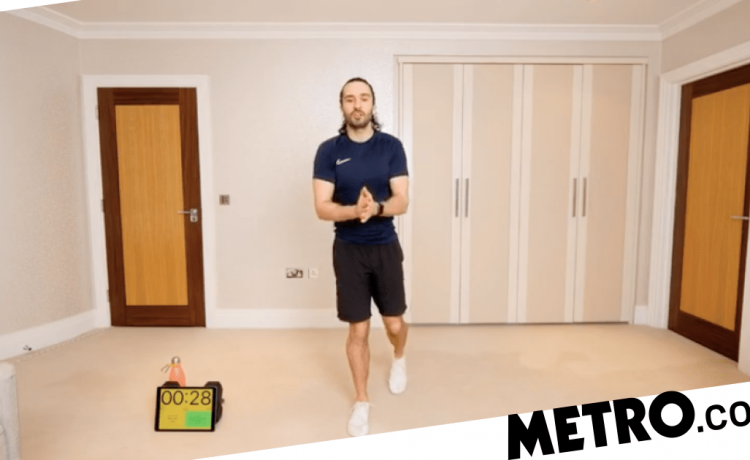 Joe Wicks has come good on his promise of returning to his PE With Joe YouTube series with the country plunged into another lockdown as he got back to the burpees and Pikachus today.

We can only imagine Louis Theroux is loving life as fitness icon Joe began his latest round of tri-weekly workouts a week after Prime Minister Boris Johnson told the country, yet again, to stay at home, filming his latest spirited workout from his loungeroom in London.

‘I’m going to be here as long as you need me…I’m out of breath, but I’m glad I’m back,’ Joe said, as he launched into a cartwheel and roly-poly when arriving on camera.

As Joe began his warm-up people began tuning into the live-stream in their big numbers, with 100,000 on the counter just a few minutes in. That climbed to 118k as he began the moves.

‘That means there are literally hundreds of thousands of people doing this workout around the world,’ the star said as he added his excitement to be back at it after a few months out of our living rooms.

Oh and yes, Fancy Dress Friday is back, with Joe saying he’s got some new outfits on the way to delight up each week.

He went on: ‘Please tell your friends and family, as many schools…this is going to help everybody get through the day and feel amazing.

‘Great news – all of the money we raise from YouTube this time around, we’re donating to BBC Children In Need, so it’s going to go to vulnerable children across the UK.’

Last time Joe did his lockdown workouts he raised £580k for the NHS, donating all the lucrative YouTube earnings his channel made. He also raised £2million for Children In Need after a gruelling 24-hour workout last year.

Joe, who recently received an MBE honour from the Queen for his efforts to keep the nation’s kids fit during the first lockdown, announced he’d be back on our screens.

In an Instagram post, the 34-year-old wrote: ‘PE with Joe is back ❤️🙌🏽 Starting Monday the 11th January at 9am on my YouTube channel. I am committing to 3 live sessions per week: Monday, Wednesday and Friday at 9am(UK time) They will be 20 minutes long and designed for children.

‘Please please share this with as many families as you can and let your schools know so they can notify the parents ASAP and we can get as many young children taking part.

‘This is so important for our children’s emotional and mental health 🙏🏼🌍 Lots of love Joe 😀.’

PE With Joe returns Monday, Wednesday and Friday on YouTube.