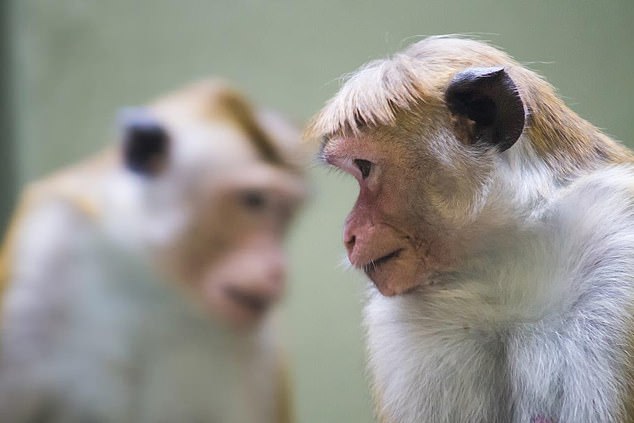 A monkey has infected a lab worker in Japan with the deadly herpes B virus, officials say.

The scientist has not been named but is reportedly in a critical condition after suffering headaches and a fever.

They are an employee of an unidentified pharmaceutical company who use macaque monkeys to conduct research.

The virus is harmless to primates but nearly always fatal to humans if untreated, causing inflammation of the brain and spinal cord.

It’s the first time a human case has been reported in Japan, and worldwide just 50 cases have occurred in 88 years.

Most of these people got infected after they were bitten or scratched by a monkey. In 1997, a researcher died from B virus infection after bodily fluid from an infected monkey splashed into her eye.

A monkey has infected a lab worker in Japan with the deadly herpes B virus. They are an employee of a pharmaceutical company who use macaque monkeys (stock) for research

Officials in Kagoshima City, western Japan, said the patient was working at a local company involved in the research and development of drugs.

The employee reportedly assisted in studies involving monkeys, according to NHK Japan.

The person visited a hospital complaining of a headache and fever. Other symptoms of the virus include shortness of breath, poor co-ordination and flu-like aches.

The National Institute of Infectious Diseases confirmed earlier this month that the patient contracted the B virus and is in critical condition.

There is no record of the employee being bitten by a monkey, and it remains unknown how the infection occurred.

Health ministry officials and local authorities said they found no problems with the management and control of the research lab.

Of the 50 people infected with herpes B since 1932, 21 of them have died, according to The US Centers for Disease Control and Prevention.

The CDC says the risk of human infection is extremely low even if they are bitten or scratched by wild monkeys.

The last death was Elizabeth Griffin, 22, in 1997. She was working as primate researcher at Yerkes Regional Primate Research Center in Atlanta, Georgia, when a rhesus monkey flicked a bodily fluid in her eye.

Ten days later, her eye was inflamed. And then six weeks after that, she died of herpes B virus complications which paralysed her body.

Brian Lee, 60, is one of the few people in the world living with herpes B virus – which he says has been a ‘nightmare’ for ten years.

Mr Lee, of San Antonio, Texas, was struck down with it while working at Texas Biomedical Research Institute, where 2,500 primates are tested for research into diseases such as AIDS.

His job was to clean enclosures and feed monkeys. Every day he layered up in a protective bodysuit and glasses to protect him from splashes and bites.

But in the summer of 2008, water splashed in his eye when he was spraying down a cage. He was also cut by a shard of plastic that tore his bodysuit.

Last year, the grandfather-of-four revealed his face and body is turning numb, but doctors are unable to understand why.

He said: ‘It is scary because I don’t know what the future holds for me.

‘Even with the antiviral therapy, most patients die of the encephalomyelitis or complications of the virus.

‘I feel like I’m alone dealing with this because I can’t talk to anybody else who has it.’

There has been only one reported case of human to human infection.

WHAT IS HERPES B?

Herpes B virus kills around 70 per cent of sufferers unless they are treated immediately.

It is spread via macaque monkeys.

Macaques that are housed in primate facilities usually become infected by adulthood but often have no symptoms.

Infection in humans is extremely rare.

Since the virus was discovered in 1932, there have been 50 documented human cases, of which 21 were fatal.

Most of these infections resulted from animal bites or scratches, or from contaminated materials, such as a needle, entering broken skin.

However, a scientist died in 1997 after being splashed in the eye with an infected animal’s bodily fluid.

Vets and lab workers are most at risk.

The herpes B virus can survive for hours on objects, particularly if they are moist.

Disease onset usually occurs within a  month of virus exposure but can be as little as three days.

If the virus is not treated immediately and therefore enters the central nervous system, most patients die even with treatment.

The most common cause of death is respiratory failure with paralysis, which starts in the lower limbs and moves up.

The few who survive often have lasting brain damage.

If a person suspects they may be infected, preventative anti-viral therapy may be required up to five times a day for two weeks.

Treatment depends on whether the central nervous system is thought to be affected but usually involves anti-viral drugs given intravenously twice-a-day.

There is no vaccine for herpes B.

Those who work with macque monkeys should wear proper protective clothing, including gloves and a face shield.

The animals should also be handled humanely to reduce the risk of bites and scratches.