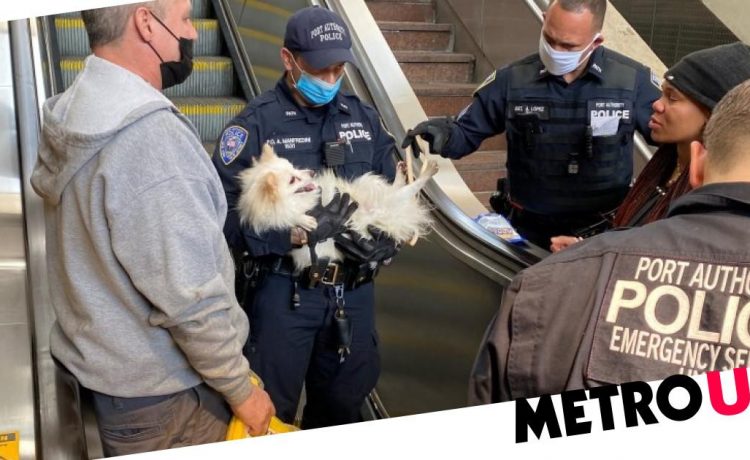 A dog that got his paw stuck in a moving escalator at a train station was saved by two police officers who heard him barking in pain and raced to the rescue.

Port Authority police Officers Anthony Manifredini and Matthew Maiello were on duty at the Journal Square PATH station in New Jersey on Wednesday just after 1pm when they heard a woman screaming in panic. Then, they heard a ‘yelping’ sound, according to NBC New York.

The officers quickly found the pup, Scott, wimpering with his left paw stuck at the bottom of an escalator as his owner yelled for help.

Scott’s paw was finally freed when the officers pried the grate from the motor stairs, according to the Port Authority of New York and New Jersey.

The pup’s rear paw had several puncture wounds and lacerations. A sergeant who also responded, Angel Lopez, flagged a taxi for the owner and paid for the ride to an animal hospital.

Information on Scott’s condition was not immediately available on Thursday, but he appeared to be in a good position to recover thanks to the quick actions of the hero cops at the station.

READ  Hive heists: why the next threat to bees is organized crime
Share on FacebookShare on TwitterShare on PinterestShare on Reddit
newsgrooveApril 15, 2021