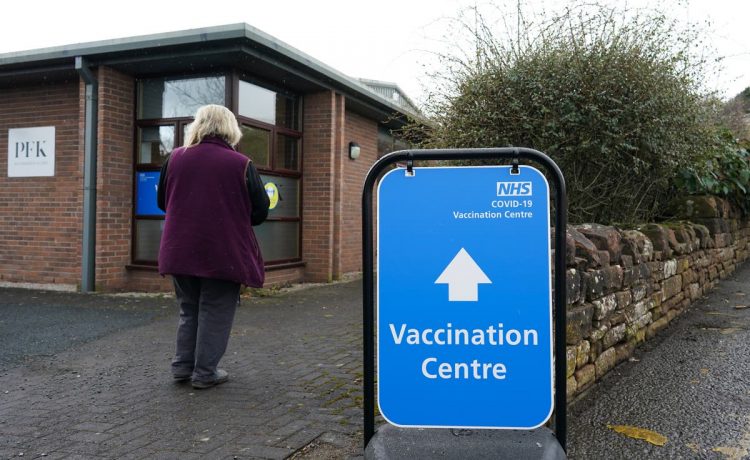 cientists and ministers today said the Oxford/AstraZeneca vaccine is “safe” and appealed to the public to take it when offered.

Minister Paul Scully told Sky News: “The AstraZeneca vaccine is safe, it’s saved thousands of lives. It’s gone out to millions of people, both here in the UK and across the world, and it’s continuing to save lives. If you’re invited to have the vaccine, either first dose or second dose, please do go and get it.”

“I’m very excited and very happy,” she said at the West Wales General Hospital in Carmarthen. “I’m an unpaid carer for my grandmother so it is very important to me that I get it, so I can care for her properly and safely.”

Experts said the risks of not having an AstraZeneca jab far outweighed any risk of having one.

Professor Calum Semple said he was “not worried one little bit” about headlines around the vaccine. The Sage scientist told LBC: “I’m 53, my risk of death from Covid is about one in 13,000. For me it’s a no-brainer, I need to have the vaccine.”

Professor Adam Finn said the cases causing concern were blood clots associated with low platelet counts “which we don’t normally see in cases of thrombosis”.  He said the “risk-benefit is very strongly in favour of receiving the vaccine”.

GP Dr Ellie Cannon said the risk of a clot was “incredibly rare”.

Assessments are under way into a very rare and specific type of blood clot in the brain, known as cerebral venous sinus thrombosis (CVST), which has occurred unusually together with low levels of platelets (thrombocytopenia) in small numbers of adults who have been vaccinated. Only 30 cases of the rare blood clot and seven deaths have been reported after more than 18 million people received the jab.

Professor Finn, from the University of Bristol and a member of the Joint Committee on Vaccination and Immunisation, said concerns over clots were being taken “very seriously” and being “very thoroughly” investigated.

The public could expect more information from the official regulator, the Medicines and Healthcare products Regulatory Agency (MHRA), within 24 hours.

A former head of the MHRA, Professor Sir Kent Woods, told LBC radio: “We can say I think, that if there is a connection, it’s a very, very rare one and this is why I am not concerned about the fact that relatives of mine have had the AstraZeneca vaccine in their forties.”

He continued: “The risks of Covid are much higher. The reason it is so difficult to be certain whether or not there is a cause-and-effect relationship, even in younger people, between the vaccine and these thrombotic events, these clotting events, is that there are such clotting events occurring in the background anyway.”

Asked about so-called vaccine passports, Mr Scully said: “The work that’s being done at the moment is concentrating on ticketed big events and those types of things because they are tougher to get back to a semblance of normal, rather than the high streets with non-essential retail and hospitality, including pubs.” Former health secretary Jeremy Hunt said there is “urgency” over the MHRA investigations.

The chairman of the Health Select Committee told BBC Radio 4’s Today: “I think there is urgency… But I think people do understand that this is a new virus, these are new vaccines, there is no medicine that is 100 per cent safe, and that’s why you have to look at these very difficult balances of risk.”

In Wales, Miss Taylor admitted that she had not heard of the Moderna vaccine until she was told she was receiving it. “It was great, the nurses were lovely and it didn’t hurt,” she said. “I feel thrilled and really happy and honoured, and I just hope it goes well for everybody.”

The further education college worker said she was aware of the concerns about patients receiving the Oxford/AstraZeneca vaccine developing blood clots.

“I had heard but it doesn’t concern me too much, and I guess if it happens, it happens and I am in the right care if I need it, and I feel happy that I’ve tried the new one.”