The Chinese authorities are trying to usher the country back to work, a month after announcing the unprecedented quarantine of millions of people. But they face a difficult balancing act between containing the virus and supporting a faltering economy.

Wuhan and surrounding Hubei province, the centre of the outbreak, have been the focus of disease prevention efforts. over the last four weeks. As the death toll climbed to more than 2,000 worldwide, and infections to over 75,000, the vast majority of cases were still inside that quarantined zone.

But the disease had spread far across the country before Hubei was sealed off, and some of the worst-affected places are the manufacturing and economic centres that power China’s economy.

Southern Guangdong province, just across from Hong Kong and home to international giants such as Apple supplier Foxconn, is the second-worst affected province after Hubei, with 1,339 cases of the coronavirus confirmed and five deaths.

Eastern Zhejiang, near Shanghai, is the fourth most seriously hit, with 1,205 cases by , although only one death. It is also the base for companies including the hugely influential Alibaba, China’s answer to Amazon and eBay.

Those total numbers of infections are far above the 639 cases registered across all of China on 23 January, when Hubei was put on sudden lockdown.

The situations are not directly comparable; coronavirus had been spreading almost unchecked in Wuhan for weeks before the quarantine, and overwhelmed hospitals appear to have sent patients home, only to spread the disease.

Authorities in other areas started tracking cases much earlier and have better resources to isolate and treat those who fall sick, something reflected in a much lower death rate.

The speed of the disease’s spread is perhaps not surprising given Wuhan’s position as a regional economic hub, with links to other key centres, and the fact that the coronavirus has proved contagious in the early days of infection when patients have few symptoms, making it hard to identify carriers as clusters spread.

Yet China cannot afford for its factories to sit idle, or its restaurants and shops to stay empty indefinitely. Authorities were already worried about faltering growth after last year saw the slowest rate of expansion in almost three decades; GDP growth had not slid so low since 1990, when China was isolated in the aftermath of the Tiananmen Square massacre.

An influential Chinese economist has already warned that the coronavirus crisis could slice a full percentage point off growth this year. So authorities are trying to balance two unfathomable risks – of either fuelling the coronavirus by pushing too much for normal routines, or paving the way for the collapse of their local economy by keeping everything on lockdown.

Many small and medium companies in particular are already hovering on the brink, and a wave of bankruptcies is expected. Retail and hospitality companies expected bumper sales over the lunar new year, and even factories that closed for the holiday expected to reopen in early February.

In Shenzhen, the border city that has come to rival Hong Kong, businesses have been told they can resume work immediately if they have virus control measures that include disinfecting, giving employees at least two masks a day, making temperature checks, and having their plans approved by local officials. There is already a gap between regulation and reality, however. “We started today, but the boss only gave us one mask when we all know he’s supposed to give out two,” said one 52-year-old woman employed at a Shenzhen factory making plastic items such as skateboard wheels, cups and toy parts.

“My husband, who works at a restaurant near here, is also only getting one mask per day,” she added, giving only her last name, Xiao, over fears of being fired or getting her boss into trouble.

Getting employees back to their desk is a further problem for companies that are ready to re-open. Xiao, a migrant from Sichuan, said only about 20 of the factory’s 50-strong workforce had returned from other parts of China. Overall, less than a third of the country’s nearly 300 million migrant workers, who power everything from factories to courier networks and restaurants, have returned to the cities from holidays in their home towns and villages, the country’s transport minister said last week.

Some are worried about the virus, others unsure if their jobs will be open, but many are struggling to get transport with strict new restrictions meant to slow the spread of the disease. Train tickets have been limited so that passengers aren’t carried in close proximity, and many bus services have been cancelled.

To try to counteract this, the Zhejiang province has provided 100 million yuan (£11m) of subsidies to help people return, new tax policies to support business, and has even hired cars, buses and trains to transport employees back to work.

One worker from the tech hub of Hangzhou, in a county where there have been 169 confirmed cases, said transport was less of a problem in an economy focused on higher skilled labour – “we don’t have as many migrant workers in Hangzhou” – but government efforts to get people back were encouraging.

READ  Australia Perseids 2019: How to watch the meteor shower light up the night in Australia

In the decision to get back to work, officials may also be weighing the accelerating spread of the coronavirus elsewhere as cases appear across the Middle East, and numbers grow closer to home in neighbouring Asian nations.

Many infectious disease experts now believe it is likely to become a pandemic, and even the World Health Organisation director general, Tedros Adhanom Ghebreyesus, warned that the window for containment is “narrowing’.

If quarantine and business shutdowns can’t stop Covid-19 in the way it halted Sars in 2003, its heavy cost on local economies – and populations – look far less defensible, both in China and beyond.

“Yes, we want to stop (the) spread, but must start caring a lot more (about the) plight of over 50 million people in Hubei,” said Lawrence Gostin, Professor of Medicine at Georgetown University and Professor of Public Health at the Johns Hopkins University, wrote on Twitter.

“Ongoing threat to physical and mental health in Hubei is unconscionable – (people are) trapped together and fearful. Moreover, once quarantine ends, people in Hubei will flee. During the influenza pandemic of 1918, quarantines delayed the spread but over time made little difference.”

The secret call of the wild: how animals teach each other to survive

Covid-19: how do you lift a lockdown? – podcast 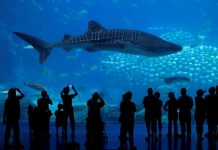 Atomic bombs and whale sharks: How to calculate age of world's largest fish