Meet Boris, the shopkeeper cat frequenting every store on the high street 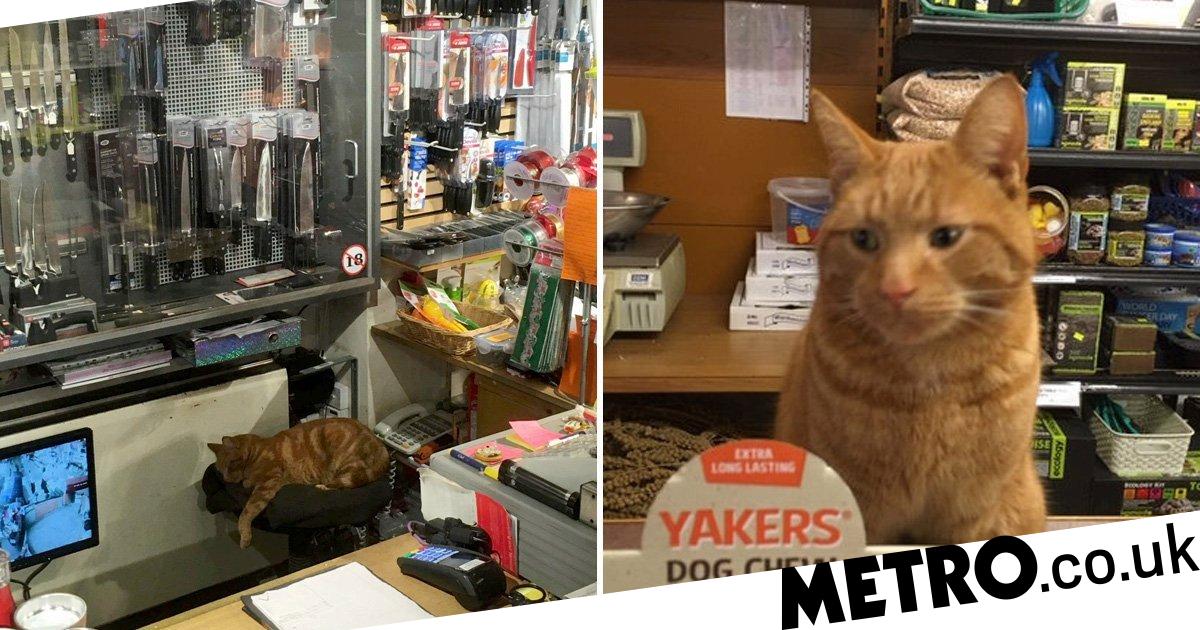 Boris is a friendly cat that makes himself at home in almost every store on a high street, playing with staff and customers and keeping an eye out for any trouble.

He snoozes in windows, on counters, chairs, and in storerooms, and loves being stroked and given treats by customers and staff.

Though he has a loving home with Jessica Coppell, 30, and her three daughters, it doesn’t stop Boris milking the attention he gets outside.

Boris is a frequent visitor to pet store Natural Pets of Wells, where he loves to play with the cat toys, and even perches up on the counter to keep an eye on the customers.

The cheeky cat is such a regular that he even has his own bed at the store (which he picked out, obviously).

Heather Derrick, owner of Natural Pets, said: ‘Boris is one seriously entertaining cat who knows just how much his cuteness level can get him his own way.

‘He is clearly very well fed and cared for by his owners but he still comes in most days trying to convince us he is starving.’

The pet shop staff like to spoil him with treats, which is probably why he keeps coming back.

Heather added: ‘He particularly likes having a nap in the middle of the shop window so he can watch the world go by for a while before settling down for a nap.

‘We have even made a space for his bed under Santa’s sleigh in our Christmas window – he was very put out when we were changing the window display and moved him from his favourite spot.

‘We have a lot of chuckles at the astonished looks on people’s faces as they pass by, when what they thought was a toy cat in the window yawns and stretches,’ Heather added.

Matt Pyne, who owns one of the shops Boris loves to visit, Protec, said: ‘Boris the cat has become quite the celebrity on Queen Street.

‘Like clockwork, at 9am every day, he can be found outside Protec, waiting to be let in.

‘Boris can regularly be found curled up in a wicker basket in Protec, quite often surprising customers, who assume he’s a model, when he starts to move.

‘At the end of each day, he knows to take the shortcut through Protec and out the back door to get back round the corner to his home in time for tea.

Jessica, an insurance broker assistant, said: ‘We actually love how much joy he brings to everyone and how accommodating they all are.

‘They all spoil him rotten and are even teaching him tricks.

‘We are often recognised when we are out around Wells, and people will tell us their stories about him.’

The family also has two other cats, Buttons and Boots – and say Boris always comes home in time for tea with his siblings.

Do you have a pet with a brilliant quirk or a naughty habit? Get in touch to share their story by emailing MetroLifestyleTeam@Metro.co.uk.

MORE: Adorable cat looks like baby Yoda – but vet reminds fans that there’s millions like her that need a home

MORE: If you ate Christmas leftovers for breakfast, you’re not alone

MORE: Can you give this cat who can’t stop sneezing a forever home?

READ  Jerks filmed ‘surfing’ on back of rare protected whale shark
Share on FacebookShare on TwitterShare on PinterestShare on Reddit
newsgrooveDecember 26, 2019