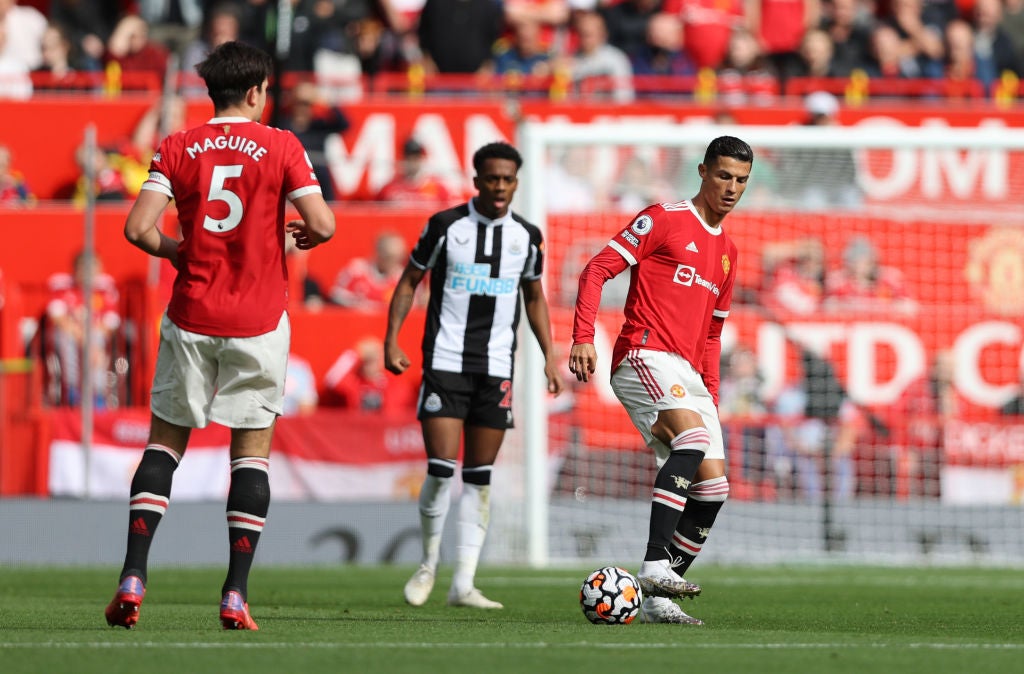 Follow all the action live as Manchester United host Newcastle in the Premier League this afternoon, with Cristiano Ronaldo set to make his return.

After sealing his sensational return to Old Trafford, Ole Gunnar Solskjaer has confirmed Ronaldo will make his second debut for the club, although the head coach refused to state whether the Portuguese would make the starting line-up. “He’s had a good week with us [training] here and he will definitely be on the pitch at some point, that’s for sure,” Solskjaer said.

United took seven points from their opening three matches, thrashing Leeds before being held by Southampton and narrowly defeating Wolves. Jadon Sancho is also in line to feature, having overcome a knock sustained while on international duty with England.

Spirits are far less optimistic at Newcastle, where fans have once again begun to vent their frustration at Steve Bruce, with the Magpies taking just one point from their first three matches. Joe Willock was the only major arrival in the summer window and the club seems destined for another nervous season in limbo. Here is everything you need to know:

After what in truth was a relatively poor performance from Cristiano Ronaldo for the majority of the first-half, with plenty of mis-controlled touches, the Portuguese forward scored with his first real chance of the game.

In truth he couldn’t really miss after Woodman’s error. The goalkeeper will blame a slight deflection on Greenwood’s shot but that still doesn’t justify directing the ball directly into Ronaldo’s path for a simple finish.

Newcastle had defended relatively well until that point and had threatened on the counter on a couple of occasions, but not they face enormous task to earn a result from a match in which they are clearly second best and facing a buoyant crowd.

45+2 – Of course he does. Just as I was praising Freddie Woodman, the Newcastle goalkeeper spills a tame shot from Mason Greenwood and Ronaldo reacts fastest to tap the ball into the empty net.

43’ – It’s the Newcastle fans who are making all the noise now after a few strong periods of possession.

Man United have been the better team, no doubt, but Newcastle have defended relatively well and restricted the home side to few genuine chances.

Freddie Woodman in goal has played particularly well so far.

Newcastle dangerous on the counter again

38’ – Allan Saint-Maximin breaks well from a United corner and is one-on-one with Aaron Wan-Bissaka. He waits for support from team-mates and eventually plays in Sean Longstaff, but a great challenge from Harry Maguire nicks the ball away before he can pull the trigger.

32’ – United break down the right through Fernandes and he passes into Sancho on the edge of the area, but the winger’s first touch is poor and takes him behind a defender, leading to a tame shaft that deflects wide for a corner.

Harry Maguire sees a weak header saved by Woodman from the subsequent delivery.

30’ – Fernandes again tries a shot from thirty yards and this time Jadon Sancho, who was looking for a re-bound, almost deflects it inside the far post on its path to goal but the ball drifts a yard or so wide in the end.

26’ – Bruno Fernandes attempts to beat Freddie Woodman with an audacious shot from all of fifty yards, and has the Newcastle ‘keeper scrambling, but it drops just beyond the roof of the net.

De Gea makes save from Ritchie

23’ – A strong spell of possession in the United half for Newcastle leads to a left-footed shot from Matt Ritchie which takes a heavy deflection of Nemanja Matic and forces David De Gea to adjust his footing, before eventually making a relatively comfortable save low down to his left.

20’ – Big chance for Raphael Varane as he breaks away from his marker from a corner but his glanced header towards the far post doesn’t have the right direction on it and ends up drifting a fair way wide of Woodman’s left-hand side.

Best opportunity of the game so far.

Newcastle look dangerous on the break

15’ – Allan Saint-Maximin leads a fast Newcastle counter but eventually dawdles on the ball for too long before finding Matt Ritchie, and the Scottish wing-back’s shot is closed down.

A little reminder that Newcastle aren’t planning to roll over for United and Ronaldo, here.