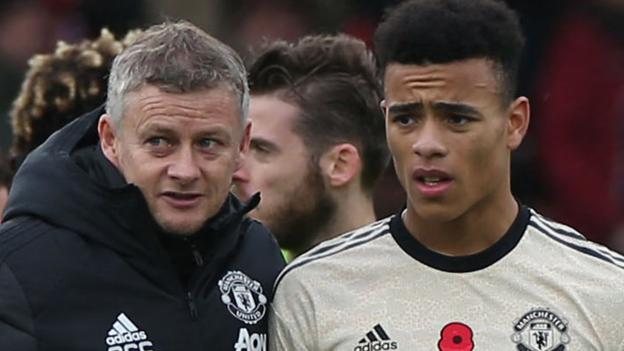 Manchester United manager Ole Gunnar Solskjaer says he is not concerned about his attacking options, with Mason Greenwood’s development compensating for the loss of Romelu Lukaku.

“We always believed Anthony Martial and Marcus Rashford were going to score goals but Mason has filled a big void,” said Solskjaer.

“I’m not worried about goals from centre-forwards.”

Greenwood, 18, has scored eight goals in 22 first-team appearances this season, with the majority of his playing time coming as a substitute.

United were heavily linked with Red Bull Salzburg striker Erling Braut Haaland before the teenager agreed a switch to German side Borussia Dortmund on Sunday.

However Solskjaer, who is understood to have flown to Austria to speak to Haaland as United considered a bid, insists the failure to sign his fellow Norwegian does not leave him under-staffed in attack.

“Romelu’s a good striker and he’ll always score goals but it was time for him to move on,” he said.

“We didn’t find the right one outside our club but we had Mason.

Solskjaer also said the way a new signing would fit into the dressing room would be key to their considerations in January.

“I’m optimistic we can keep players fit and if the right ones become available we do have the resources,” he said.

“It has to be the right type and it has to be a good investment for the long term as well.”