Manchester City set up a first women’s domestic cup final with Chelsea after seeing off Tottenham in the semi-finals of the Continental League Cup.

It was a comfortable victory for Gareth Taylor’s side, who have not lost a game in all competitions since 14 November.

Jess Park opened the scoring in the first half with a terrific low finish, before setting up Khadija Shaw and Lauren Hemp either side of the break.

Jessica Naz fired wide for Tottenham in the first half with their best chance.

City, who take on Chelsea on 5 March in Wimbledon, have surprisingly never faced their league rivals in a domestic cup final despite the League Cup being won by one of the two sides in four of the last five seasons.

City’s route to the final has been impressive after they qualified from a group containing local rivals Manchester United, as well as Women’s Super League opposition in Everton and Leicester City.

They made light work of Thursday’s semi-final too – Tottenham limited to just one chance through Naz, who dragged the shot wide of the right post after she was played through one-on-one with goalkeeper Ellie Roebuck.

That was a warning sign for City, who had dominated possession but only teased half-chances with Hemp, but they responded immediately to take the lead.

Park was hugely impressive – using her skill to get away in the box before firing it coolly into the far corner and past goalkeeper Becky Spencer for the opener.

The 20-year-old was in the right position to pick up the rebound from Caroline Weir’s strike six minutes later and teed up Shaw for the easiest of tap-ins on the goalline.

It was Park’s superb deep cross in the second half which set up Hemp too – the England international thumping in a header at the back post to make it 3-0.

Spurs, who had a thin squad due to injury and players competing internationally at the Asia Cup, could not muster a comeback and City were able to see out the game comfortably.

City should have scored more too – Lucy Bronze headed it onto the post in the second half, before debutant Julie Blakstad’s cross was nodded wide by Shaw.

A rehearsal of March’s League Cup final will take place this weekend when Chelsea host City in the WSL – Emma Hayes’ side won 4-0 in the last encounter in November, which was City’s last defeat in all competitions. 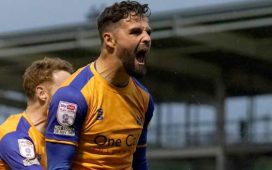