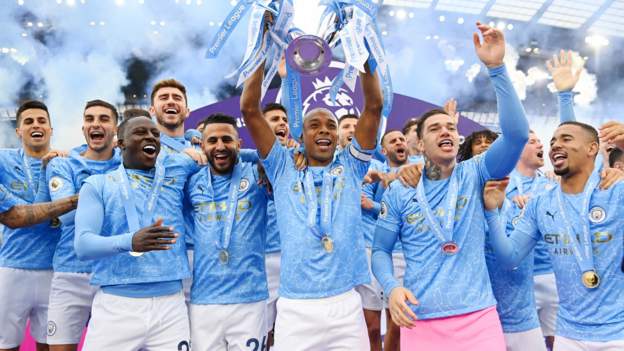 Manchester City are ready to spend big on a couple of players of quality this summer, says chairman Khaldoon al-Mubarak.

In the wake of the club’s Champions League final defeat by Chelsea, Khaldoon says City “will be back”.

He said “the biggest mistake” would be to rest on their laurels after winning the Premier League.

Speaking through his club’s media channels, Khaldoon said the emphasis would be on “quality”.

His comments come amid a growing expectation that City are preparing a club record bid for England skipper Harry Kane.

“Having won the league, it is not the time to sit back and be content,” said Khaldoon.

“That would be your biggest mistake. This is the time to send a strong message that there is no contentment, that you are not satisfied with just winning the league.”

City have space for Kane in Pep Guardiola’s squad following the departure of striker Sergio Aguero, one of the club’s highest earners.

“Sergio Aguero’s shoes are very hard shoes to fill but I am confident we will find the right player to fill those shoes,” said Khaldoon.

“There are other areas in the team that need investment. Not too many – it is not about numbers, it is about quality. But we will bring quality into the squad in a couple of key positions.”

This summer many of City’s Premier League rivals will be attempting to stretch budgets that have been massively impacted by playing virtually a full season without fans.

And there are no guarantees full stadiums will be allowed when the 2021-22 campaign begins on 14 August.

“Our financial balance sheet is strong and we will invest wisely and do what we need to do,” said Khaldoon.

“But the market will be difficult as there won’t be enough liquidity. There will be movement but it will done in a more creative way.”

It has been suggested City might use players as bargaining chips to get deals done, although in the past, such transfers have proved difficult.

But despite criticism from outside the club of Guardiola for his team selection against Chelsea in Porto, the City hierarchy is solidly behind the man who has brought them three league titles out of the past five and led them into what Khaldoon describes as the club’s “golden era”.

“We will do everything we can to keep Pep for as long as possible at this club,” said Khaldoon.

“He is in the right environment and has the right infrastructure around him.

“We have the greatest trust and the greatest relationship and we have achieved so much. The journey goes on and it will go on as long as Pep is happy and we are happy.”