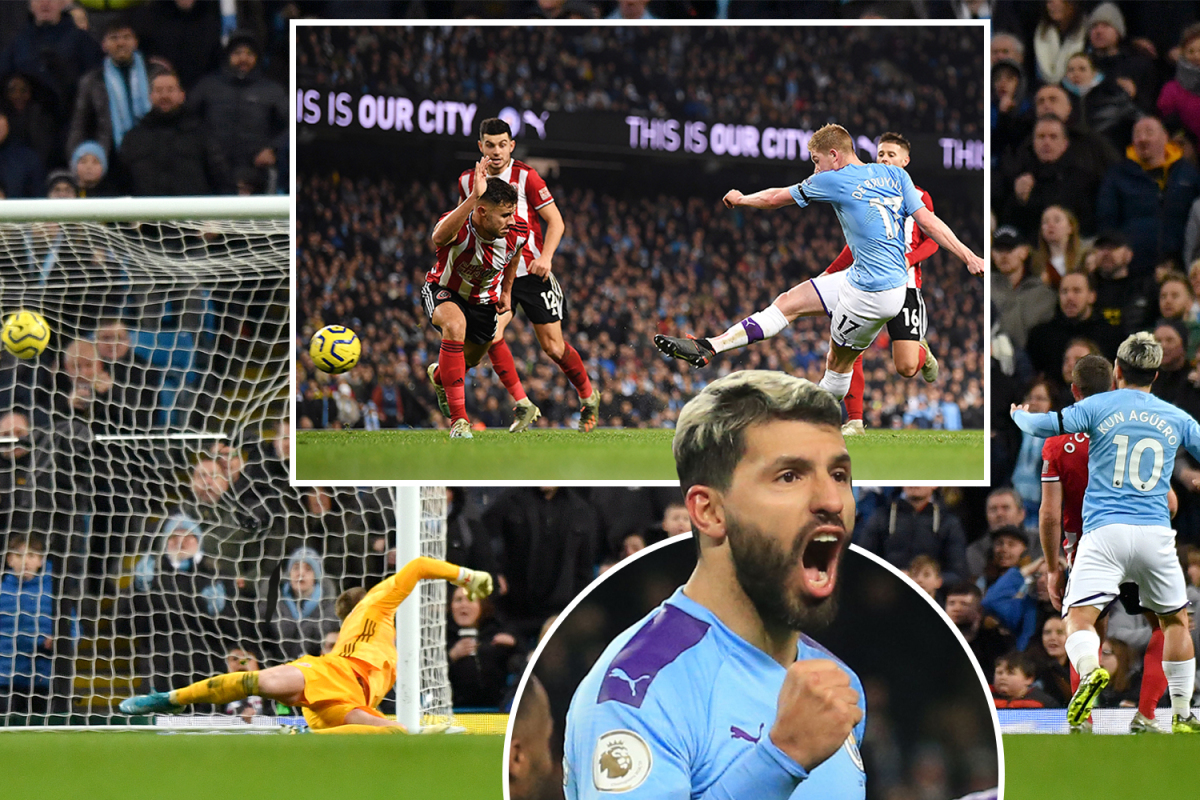 PEP GUARDIOLA said he had no choice but to put his weary players “in the fridge” after their game at Molineux on Friday.

And Manchester City certainly took a while to warm up against Chris Wilder’s away day specialists.

But Sergio Aguero and Kevin de Bruyne were ice cool as ever with their second half strikes to get the champions back on track again.

Mind you – the name of referee Chris Kavanagh certainly will send a shiver down the spines of Blades fans for a while to come.

The official gave City a helping hand with their first goal – just when they were struggling to get going.

He got in the way as Oliver Norwood and John Flack tried to clear their lines and Aguero made the most of the belated Christmas gift.

As if that wasn’t bad enough, the visitors had a first half goal ruled out by VAR after the linesman failed to spot Lys Mousset was offside.

Guardiola and the club had been outspoken in their views about their festive fixture schedule.

Kick off here was a little over 44 hours after their draining 3-2 defeat at Wolves – which saw them play the last 78 minutes with 10 men.

Yet the Etihad chief chose to make just three changes to the starting line-up from Molineux – and one of those, Claudio Bravo, was forced.

In fairness two of those who kept their places – Sergio Aguero and Riyad Mahrez – only played a half or less in the Black Country.

READ  Ferguson and Carroll turn back time but is old-fashioned a new winner?

Yet it must have been puzzling for England Under 21 ace Phil Foden – not to mention £60 million full-back Joao Cancelo, who is being linked with a January move.

No wonder Chris Wilder’s Blades – who have not lost an away league game in almost a year – fancied their chances early on.

Lys Mousset got ahead of Aleks Zinchenko to meet a Callum Robinson cross but directed his header well wide.

City had made a lethargic start but a through ball from Rodri sent Riyad Mahrez in down the right – and some fancy footwork from the Algerian created the chance.

His shot was goalbound but John Egan got back to make a key challenge and diverted the ball into the side-netting.

City were having all the possession but it was the Blades creating the better chances with Egan sending a header high over the bar.

So it was no great surprise when the visitors had the ball in the net just before the half hour as John Fleck’s clever pass was dispatched by Mousset.

The visitors celebrated but it was cut short as a VAR check showed the French forward was marginally offside – not by much, but he was.

City got the benefit of the much-maligned system on Friday night at Molineux and it got them out of jail here too.

Just before the break Mousset had another chance as he sprang City’s offside trap again and raced clear but took his shot early and rolled it into the side-netting.

When Kevin de Bruyne – of all people – completely shanked his attempt to cross from a promising position it kind of summed up City’s first half show.

They had enjoyed around 75% possession but failed to force a save out of on loan Manchester United keeper Dean Henderson.

Guardiola’s decision to go with so many of the players who had played on Friday night looked questionable.

And at that stage Fernandinho’s warning that the champions faced a battle to make the top four looked well founded.

But the game livened up soon after the break and City took the lead in controversial fashion.

Flack’s pass was destined for Oliver Norwood but with Kavanagh in the way he failed to control it and it bounced into De Bruyne’s path.

The Belgian threaded a pass through to Aguero who smashed his 14th goal of the season into the top corner.

The Argentine has spent a month on the sidelines with a thigh injury and has to make up for lost time. As ever City will be pleaed to have him back.

A VAR check followed but the goal was allowed to stand. “1-0 to the referee” sang the travelling Blades fans – and in this instance – maybe they had a point.

Some of the balance was redressed as City appealed for a penalty when a shot by Mahrez hit the arm of Egan – but this time nothing was given.

But the second goal did arrive late on as Mahrez surged forward and played in de Bruyne who cut back onto his right foot and fired low past Henderson.

The Blades missed out on a late consolation when sub Billy Sharp headed against the inside of the post and watched the ball roll along the line. It summed up their night really.