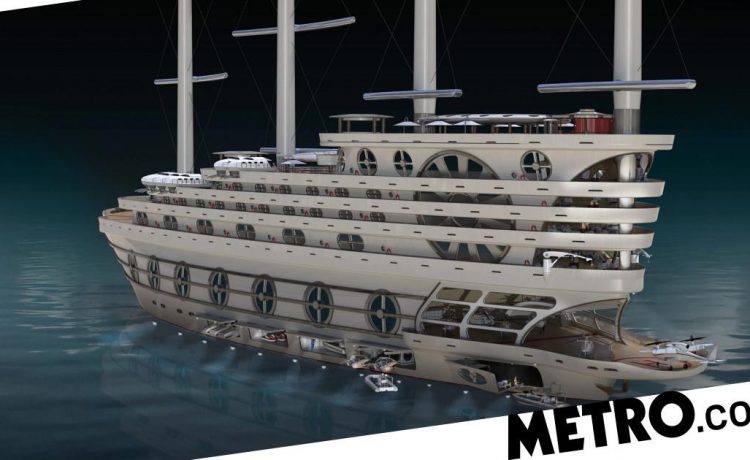 Plans are afoot for a superyacht truly fit for a Bond villain.

This concept vessel with eight decks is enough to put 99.9% of your everyday oligarch’s pleasure boats in the shade.

The lavish boat would come equipped with full-sized basketball and tennis courts, a large swimming pool, and somewhere to keep your fleet of helicopters.

Christened The Galleon, the proposed design featuring four grand sails is inspired by the ships which powered the Age of Exploration and dominated the oceans in the 16th to 18th century.

But the design isn’t just about luxury – it would be an engineering marvel too.

At more than 520ft long and with a displacement tonnage of nearly 22,000, you’d think it would be a bit sluggish – but its designers say its 10,000 horsepower engines would still get it up to 18 knots.

Space isn’t exactly an issue. It would be able to accommodate up to 200 guests, 150 crew members and incorporate a fully-enclosed 4500 square-foot hangar, with room for 10 helicopters and an aircraft maintenance facility.

The brain behind the mad-cap idea, California-based designer Steve Kozloff, describes it as an ‘explorer yacht’ which would be capable of cruising around the world in luxury.

Of course, there’d be plenty to keep you entertained while idling around the globe.

On board, you’d find an impressive array of sports facilities, a full luxury bar and two swimming pools complete with hard covers that can give you shelter if the weather out at sea turns but you still fancy a swim.

It would also accommodate a cafe, pub, restaurant – and a waterslide because, well, why not.

READ  Man drives unsupervised to own driving test, then fails it
Share on FacebookShare on TwitterShare on PinterestShare on Reddit
newsgrooveJune 2, 2021