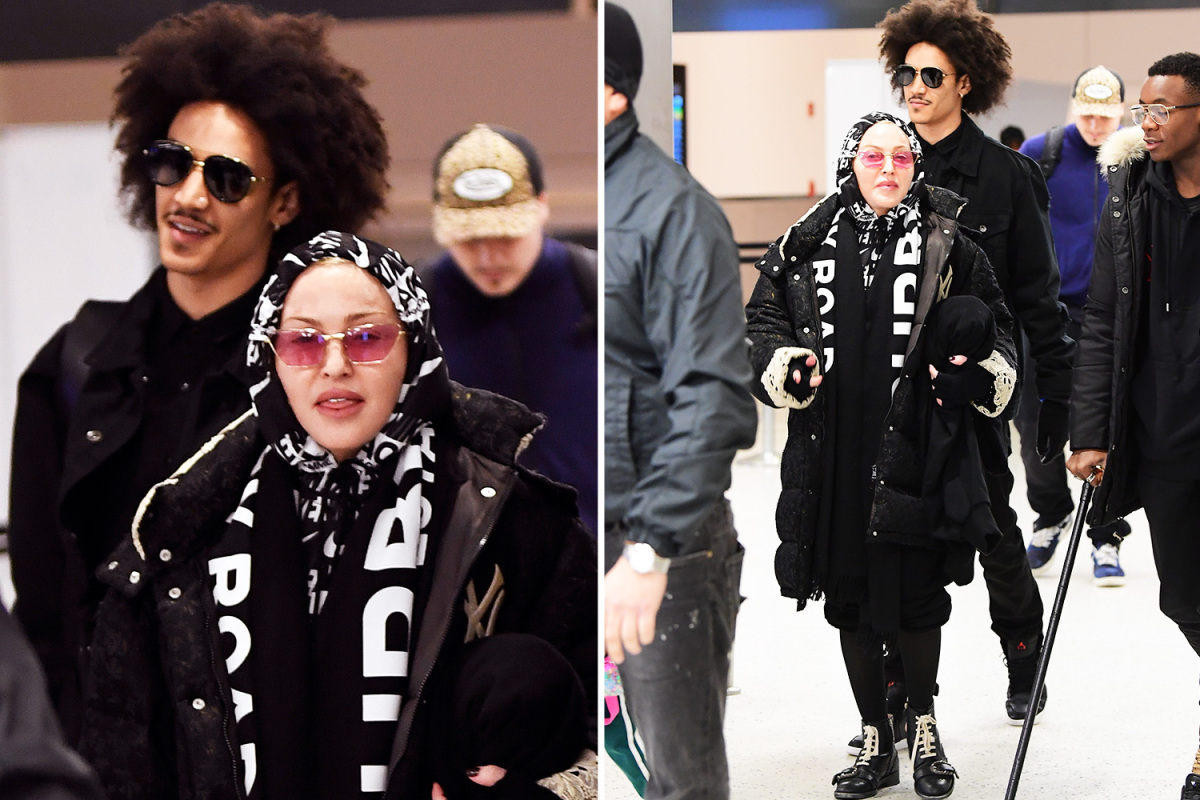 MADONNA looks set to ring in the New Year in the UK after she was seen heading to London  with her boyfriend Ahlamalik Williams on Friday evening.

The Queen of Pop was flanked by her toyboy and her children as she arrived at New York’s JFK airport, and didn’t look particularly thrilled about her journey ahead.

Dressed in a large black puffer coat and tights, the 61-year-old singer failed to crack a smile as they made their way through the terminal.

Madge completed her look with a black and white headscarf and pink tinted sunglasses as her 25-year-old beau walked closely behind her.

Backup dancer Ahlamalik was also dressed in black and wore a pair of dark sunglasses, despite being indoors.

Madonna was also joined by her children, including Lourdes Leon, 23, David 14, and six-year-old twins Stella and Esther.

Her trip to London comes just days after DailyMail.com reported that Madonna and her ex-husband, Guy Ritchie, were involved in a legal dispute just days before Christmas.

Guy is said to have filed a motion in their divorce case asking for the “enforcement or execution of a judgment or order”.

It’s suggested there has been a disagreement over where their children would be spending Christmas.

Madonna and her ex were previously locked in a custody battle over their eldest son Rocco, 19.

They fought a lengthy and bitter custody battle for him back in 2015 when Rocco fell out with his mother after he abandoned her Rebel Hearts tour and fled to London.

The teenager now lives in London with his father and stepmother Jacqui Ainsley.

So perhaps the singer’s moody expression was due to that, or the fact that she’d been forced to cancel her final tour show in Miami due to “indescribable pain”.

Madge told fans she had been left in tears while performing at a show in Miami days earlier because of injuries.

Asked how she was feeling as she walked through the airport, the singer remained silent but gave photographers a thumbs up.

No doubt she’s being well looked after by her toyboy Ahlamalik, who is 36 years her junior.

Madonna first met the dancer five years ago, and they have been an item for the past year – with Ahlamalik’s parents even approving of the relationship.

Both his mum Laurie, 55, and dad Drue, 59, are younger than the music icon but are backing the pair to get married.

Drue told the Sunday Mirror: “She told us she is so much in love with him and that we didn’t have anything to worry about as she was going to take care of him.

“We know there’s a huge age gap between the two – 36 years. Madonna is two years older than me. But I have told my son love doesn’t have an age range when you’re consenting adults.”