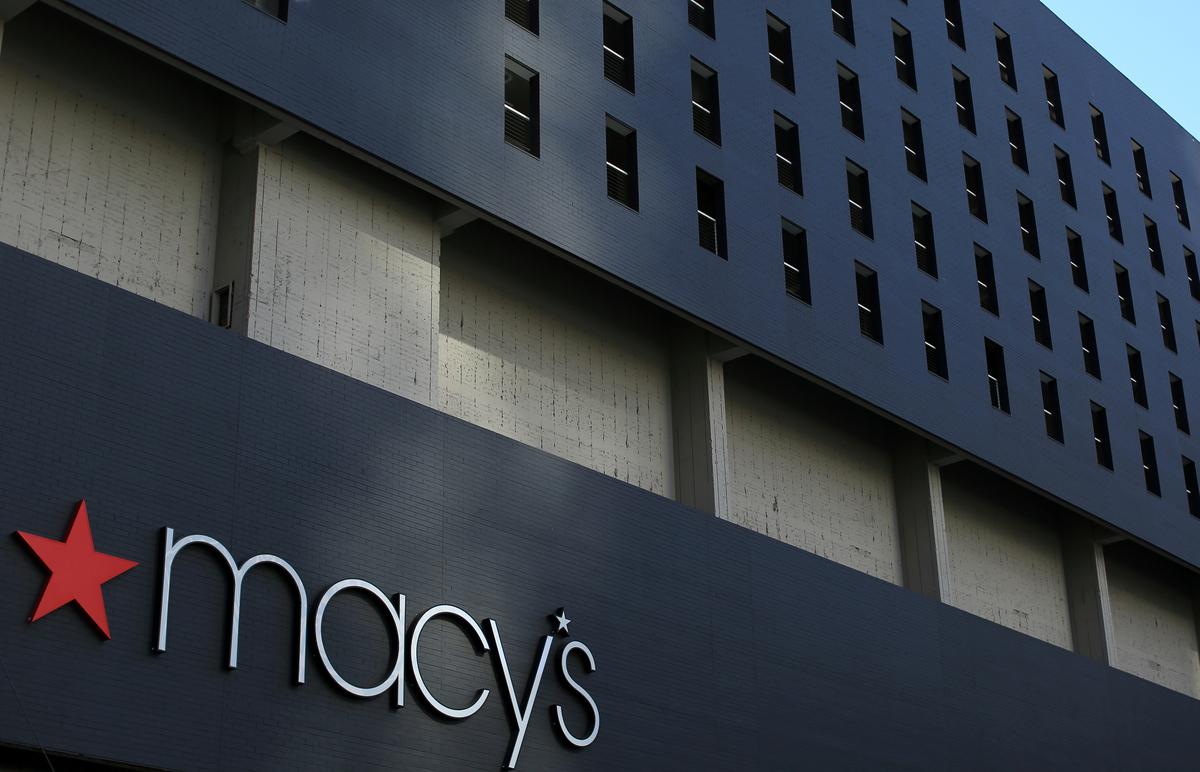 (Reuters) – Macy’s Inc (M.N) cut its full-year earnings forecast on Wednesday after missing estimates for quarterly profit for the first time in at least two years, as it discounted merchandise heavily to clear spring inventory, sending its shares down as much as 18%.

FILE PHOTO: The Macy’s logo is pictured on the side of a building in down town Los Angeles, California, U.S., March 6, 2017. REUTERS/Mike Blake/File Photo

The largest U.S. department store operator, whose flagship building in Manhattan is a major tourist attraction, blamed a bigger-than-expected decline in tourist spending for the shortfall along with weak demand for its own-brand women’s sportswear and for warm weather apparel.

“We had a slow start to the quarter and finished below our expectations,” Chief Executive Jeff Gennette said in a statement.

Tourist arrivals to the United States have taken a hit in the past year, hurt by a stronger dollar and escalating trade tensions between Washington and Beijing, denting the number of Chinese visitors to the country.

The number of Chinese citizens arriving in the United States dipped 2.8% in the first six months of the year, according to the National Travel and Tourism Office.

Like its peers, the Cincinnati, Ohio-based retailer, which has closed more than 100 stores since 2015 and cut thousands of jobs as mall traffic plummeted, faltered in the past few years as it struggled to adjust to a fiercely competitive retail landscape where shoppers buy more goods online at places like Amazon.com Inc (AMZN.O).

“While they are controlling what they can control, the headwinds from both macro and micro factors continue to grow, creating a challenging backdrop for CEO Jeff Gennette to manage through,” said Gordon Haskett analyst Chuck Grom. “The good news is that they have a plan.”

The 160-year-old company is pumping money into projects such as remodeling its stores and building up its off-price and online businesses. Macy’s also announced a partnership with fashion resale marketplace thredUP, aimed at helping the chain “reach a new customer and keep them coming back to shop…,” the company said.

Retailers like Macy’s have been burdened by a long-drawn trade war between the United States and China, which U.S. President Donald Trump escalated earlier this month by threatening to impose 10% tariffs on $300 billion worth of Chinese goods from Sept. 1. On Tuesday, the Trump administration delayed the 10% tariffs on some Chinese goods until Dec. 15.

Macy’s executives reassured investors on a post-earnings call Wednesday that the company is in “active discussions” with vendors and suppliers to mitigate tariffs and minimize customer impact in 2019 as much as possible.

“Only a small percentage of soft-good tariffs are actually getting delayed until December 15th and none have been removed yet,” UBS analyst Jay Sole wrote in a note, adding that, of the approximately 789 apparel and footwear categories on the original latest list of tariffs, only 17% have had tariffs delayed.

Gennette said he believed 10% tariffs to be manageable but that it would be harder to maintain pricing if 25% tariffs are imposed on all remaining imports from China, adding “there’s no customer appetite for price increases.”

The company’s margins in the quarter fell to 38.8% from 40.4% a year earlier, hit hard by steep markdowns.

For the second quarter ended Aug. 3, net income attributable to Macy’s shareholders slumped 48% to $86 million, or 28 cents per share.

Analysts on average had expected the company to earn 45 cents per share, according to IBES data from Refinitiv.

Net sales fell marginally to $5.55 billion, largely in line with estimates, while sales at its established stores rose 0.3%.

FILE PHOTO: An exterior of a Macy’s department store in Pasadena, California May 12, 2015. REUTERS/Mario Anzuoni./File Photo

Still, Macy’s, whose digital business posted its fortieth consecutive quarter of double-digit growth, maintained its 2019 sales expectations, and said it entered the fall season with the “right inventory.”

Macy’s shares, which have declined about 35% this year, opened at a near 10-year low. Shares were down about 15% at $16.50 in afternoon trading Wednesday.

The company, which is the first of the department stores to report results, also dragged down peers’ shares. Kohl’s (KSS.N), Nordstrom (JWN.N) and J.C. Penney (JCP.N) were down between 8% and 11%.

Reporting by Aishwarya Venugopal in Bengaluru and Melissa Fares in New York; Editing by Nick Zieminski and Diane Craft