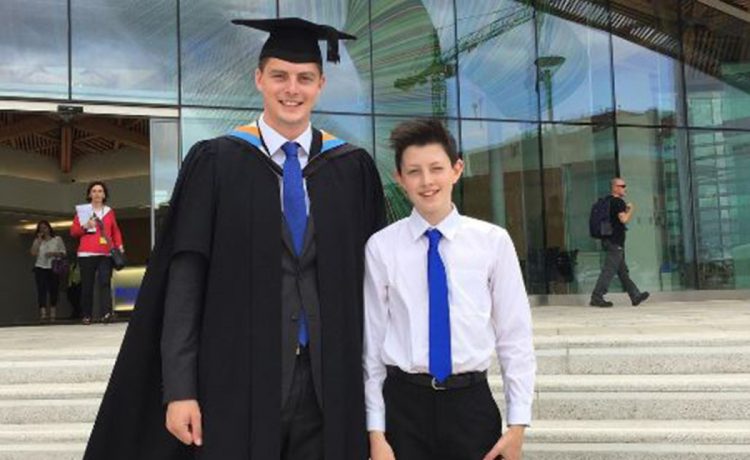 LOVE Island’s Dr Alex George left his fans in tears with an emotional post on what would have been his late brother’s 20th birthday.

The frontline worker shared a throwback picture of himself with younger sibling Llŷr, who tragically took his own life six months ago.

In the heartfelt post Alex, 30, wrote: “Today would be your 20th birthday. You were 14 in this picture. I remember how proud you were of me graduating as doctor. You ran up to me after the ceremony with the biggest smile.

“I was so excited for you to follow in my footsteps, you would have been the most amazing doctor. Although I would never admit it to you, in honesty you were the smarter of the two.”

Alex reflected: “We are ten years and four days apart, this was supposed to be the start of your 20s. You would have loved medical school and gone on to achieve so much. The very kindest of souls.

“We had so many plans for road trips, adventures and enjoying cars. I think about you every single day my boy.

“It is impossibly hard at times, we miss you so much as a family.

“I have always been so proud of you. I hope you are proud of me. Love you my boy x”.

Llŷr was 19 when he died following his own mental health battle last July.

Since then, the former reality star has taken on the role of Youth Mental Health Ambassador – appointed by Prime Minister Boris Johnson.

He recently admitted her was still struggling to deal with his grief surrounding Llŷr’s death.

The A&E doctor told The Guardian: “I think of grief as a little black box in my head. That box, it’s always in the house. You’re not focused on it, but it’s always there.

“Every now and then, you go to the shelf, you open the box – and everything comes out. That’s when things are tough.”

One wrote: “He would be so proud.. I’m sure he’s looking down on you with such love. Thinking of you 💙”

Another added: “Love and light darling Alex, you’re an incredible soul doing amazing things. This is a gorgeous pic of you both x”

“How emotional 😭 ❤️,” commented a follower.

One shared: “Breaks my heart 💔 big hugs to you and your family xx”.

Others also shared their own experiences of losing a sibling and thanked Alex for the work he was doing to highlight mental health.