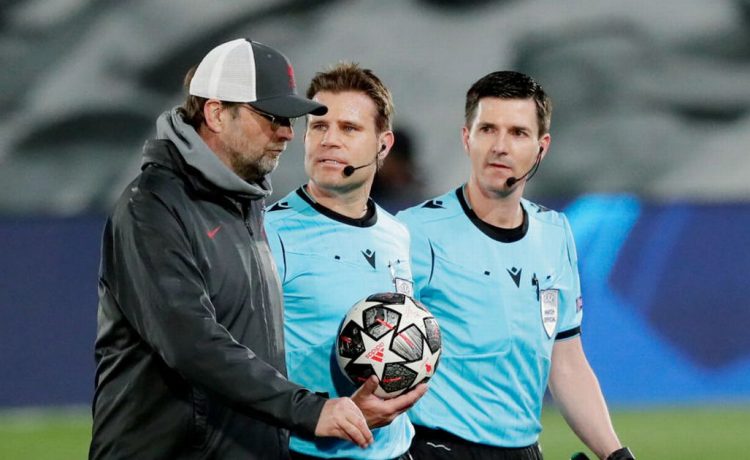 Liverpool’s mini resurgence came to a crashing halt as they were beaten 3-1 by Real Madrid in the first leg of their Champions League quarter final.

Jurgen Klopp’s side went into the game on the back of their most complete performance in months, in their dismantling of Arsenal.

Much of their return to form has been down to Fabinho moving back in to his preferred central midfield role.

For much of the campaign, the Brazilian has been forced to play in the heart of the defence, with the champions dealing with a number of injury issues.

But with the signing of Ozan Kabak and the emergence of Nat Phillips, Klopp has been able to utilise him in his correct position.

And that had reaped immediate rewards with Liverpool finally looking a more solid proposition.

Speaking ahead of the game, Manchester United legend Rio Ferdinand described the former Monaco man as an “absolute beast” emphasising just how important he was to the back-four.

“He’s an absolute beast in that position in front of the back four or back five. He knows exactly where to be at the right times,” he told BT Sport.

“Anything that goes into the strikers’ feet, he wins it and clears it. Anything into those two strikers he makes sure he gets close or makes a problem so they don’t just bring it down.

“That allows these two centre-backs to worry about the areas behind. They don’t have to worry about what’s in front, they can always be first to that ball behind.”

Unfortunately, against Real Madrid, Kabak and Phillips were unable to deal with that one problem – as the hosts caused havoc with balls in behind the defensive line.

Vinicius Jr., Marcos Asensio and Karim Benzema all managed to find themselves through on goal, with Trent Alexander-Arnold stopping the score getting out of hand.

It marked an eery resemblance to the way Leicester City ruthlessly despatched the Reds, when Jamie Vardy constantly ran in behind earlier this year.

Even the brilliant Fabinho was unable to plug the gaps that the inexperienced central defensive pairing allowed to open.

Injuries have no doubt derailed this season, but the high line doesn’t appear to work against pacey forward lines.

Fortunately, the tie remains in reach, but this should have made it clear to Klopp that while Fabinho is a big help, he isn’t the complete answer to their problems.