Liverpool boss Jurgen Klopp has been told to stop complaining about the club’s fixture pile-up by Anfield legend Steve Nicol.

The German has regularly commented on the toll this season has taken on his players and was outspoken once again following the Reds’ quick turnaround following their FA Cup win to face Southampton three days later. But Nicol has told Klopp he should take the Southampton job if he doesn’t want his players to take part in so many games each year.

It comes as the Reds boss faces making a huge managerial mistake, with Sadio Mane’s contract expiring next year. And Cesc Fabregas has told Liverpool to sign three of his Monaco teammates.

Have Your Say! Will Liverpool be able to win the Premier League title this weekend? Tell us what you think here.

The Reds will have played every single game available to the this season having reached the finals of the Carabao Cup, the FA Cup and the Champions League. It means Klopp’s side will have played 63 games come the end of the season – although he has regularly been outspoken about the number of games his side are forced to play.

But according to Nicol, fixture pile-ups are nothing new and “if you’re as good as they are and as successful as they are, you’re going to have a heavy schedule”.

Jurgen Klopp is facing one of the biggest mistakes of his managerial career.

With Mohamed Salah’s contract up at the end of next season, Sadio Mane’s situation has flown a little under the radar. But the Senegal international has been an integral part of the Reds’ success this season and has been linked with a summer move with Bayern Munich and Paris Saint-German both thought to be interested in signing the forward.

And if Klopp doesn’t sort a new contract for Mane, he could be facing the biggest mistake of his managerial career.

The former Arsenal midfielder joined Monaco from Chelsea in 2019 with the brief to help develop the club’s young stars. And after watching his young teammates in training and seeing them turn in some impressive performances in the league which have left them in second place in the Ligue 1 table, Fabregas thinks the trio are ready to play for the Reds. 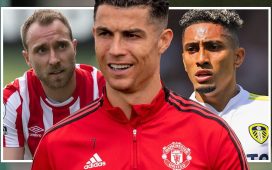