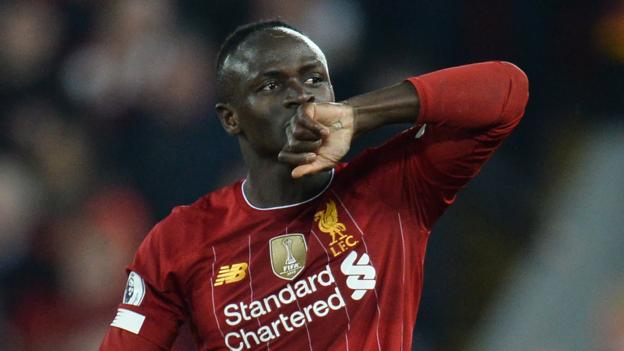 Liverpool finish the year with a 13-point lead at the top of the Premier League table following victory over Wolves amidst more Video Assistant Referee controversy at Anfield.

Sadio Mane scored the winner in the first half, slotting it past keeper Rui Patricio after it bounced off Adam Lallana’s shoulder in the box.

There was a lengthy VAR review for handball from Lallana before referee Anthony Taylor eventually confirmed the goal.

Wolves then had a goal disallowed by VAR for a marginal offside by Jonny after Pedro Neto had drilled his shot into the bottom left corner on the stroke of half-time.

Liverpool had chances to extend their lead – Mohamed Salah and Roberto Firmino coming close either side of the break, but Wolves were also bright.

Diogo Jota had two big chances in the second half – the first a shot from a tight angle in the box which flew wide of the right post, the second a festive gift from a Virgil van Dijk mistake which he hit straight at Liverpool keeper Alisson.

Liverpool finish the year as resounding favourites to win their first league title in 30 years, while Wolves end 2019 in good form despite defeat at Anfield.

There is not a weekend that goes by in the Premier League in which VAR controversy is not at the heart of it – and both decisions were marginal at Anfield.

Wolves fans were clearly frustrated, greeting referee Anthony Taylor with a roar of boos on his re-entry to the pitch following the half-time break, and they sang of their disapproval of the VAR system as frustrations continued in the second half.

Liverpool’s opening goal appeared to strike the top of Lallana’s shoulder, near his collar bone rather than his arm, while the Wolves players felt Virgil van Dijk controlled the ball with his hand before playing the long pass to Lallana.

Wolves also suffered a blow when Neto’s goal was disallowed because Spanish wing-back Jonny had a toe offside.

On a weekend where Norwich striker Teemu Pukki and Crystal Palace forward Wilfried Zaha were also victims of close offside calls, the talk – once again – will be of the use of VAR and not how Liverpool managed to grind out yet another win in the league.

“In the second half we controlled the game and nullified Liverpool to hardly anything. It is disappointing that we are stood here talking about VAR rather than the game and the way Wolves played,” former Liverpool trainee Coady said.

The difference a decade makes

It seems like it was only yesterday when Liverpool appointed Roy Hodgson as manager in 2010.

Hodgson would go on to last just six months, having made eight signings – Milan Jovanovic, Joe Cole and Paul Konchesky among them – who all failed to impress at Liverpool.

The Reds went on to finish sixth at the end of the season – 22 points behind champions Manchester United. They also lost to League Two side Northampton Town in the League Cup and did npt make it past the last 16 of the Europa League.

Fast forward 10 years and Liverpool are sporting the Fifa Champions badge on their shirts for one game in the Premier League after winning the Club World Cup in Qatar earlier this month.

Fans welcomed their players onto the pitch against Wolves with a rendition of “We are the champions… of the world”.

As reigning European champions, they already have the Premier League trophy well within their sights and it would take an almighty collapse for Liverpool to lose their position at the top of the table in the second half of the season.

Positives for Wolves despite the manner of defeat

Wolves drop to eighth place following the defeat at Anfield but they will be very happy at the halfway mark.

A comeback victory over Manchester City and the 4-0 thrashing over Besiktas in the Europa League were big highlights in December but they gave the league leaders a run for their money on Sunday despite playing in their second fixture in 43 hours.

Jota had chances to equalise in the second half as Wolves piled the pressure on and he was not alone.

Raul Jimenez and Adama Traore, both introduced as second-half substitutes, failed to hit the target from good positions, while Ruben Vinagre thumped a strike over from close range in stoppage time.

The positivity they showed throughout the game will have pleased boss Nuno Espirito Santo, who continues to work wonders with a small, but talented squad.

Wolves’ ultimate goal should be to secure European football for another season and they are on course to achieve that in the New Year.

Liverpool manager Jurgen Klopp: “It was a tough test and rightly so. Wolves are used to a tough rhythm of games.

“First half we were good and controlled the game, but I can imagine Wolves were not happy with the VAR decisions. However, the momentum went with them after that moment. We had nothing to do with the decisions.

“The second half they changed a bit. We were not fresh enough in mind to react. Alisson wanted to make the game quick, and nobody else wants to it to be! Football is like life. Sometimes you are 100% ready and sometimes not. It was a big fight.”

Wolves boss Nuno Espirito Santo: “It was a tough game. First half Liverpool was strong. We stayed in the game, stayed organised and always the danger with the quality. In the second half we had good spells and created a lot of chances.

“We finished strongly. I am very proud of the players.”

Half century for Liverpool at Anfield – the stats

Wolves return to action with a trip to relegation-battling Watford at 15:00 GMT in one of nine Premier League matches on New Year’s Day.

Liverpool have an extra day off, hosting Sheffield United on Thursday at 20:00 GMT.