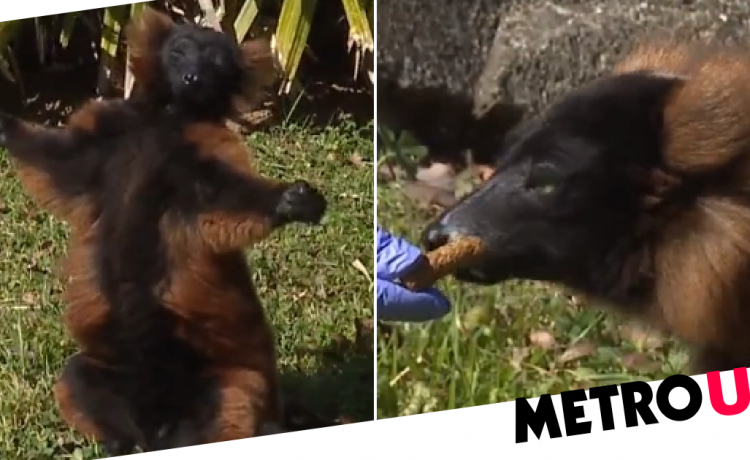 A lemur who was left in mourning after his longtime companion died has perked up now he has a new friend. The red ruffed lemur, called George, lost his mate last year – but a friendly new lemur called Marie has arrived at North Carolina Zoo in Greensboro from a nearby science center, and the pair have hit it off.

Zookeeper Kristy Russell said: ‘He’s done really well with her. They get along really well now.’ George is a laid-back character, who loves stretching out his arms to soak up the sun. Meanwhile, Marie has a huge appetite – and isn’t shy about enjoying any food put in front of her.

Russell explained: ‘Marie is super interested in everything that we’re doing, she’s super friendly. She has no problem coming up to steal the bowl right out of my hands. Russell was filmed holding a food bucket as Marie buried her head inside, and even exclaimed: ‘Marie, you’ve got to share!’ as she devoured its contents.

But George wasn’t bothered by missing out, and sat enjoying the sun as she did so, Fox8 reported. Red ruffed lemurs – as well as their black and white lemur cousins – are native to Madagascar, and are critically endangered because of activities including logging, mining and hunting. 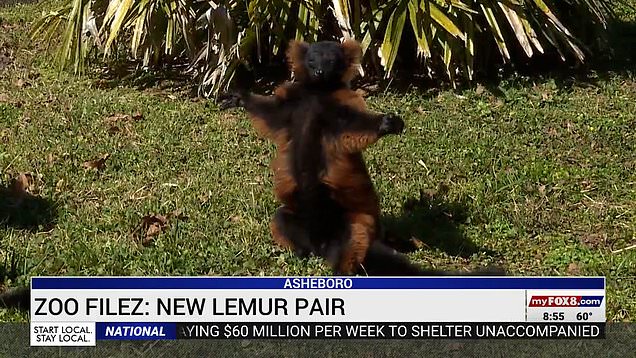 The animals get their names because of their lustrous crimson and black fur, and are larger than their black and white cousins.

As well as soaking up the sun, they enjoy grooming themselves, and are herbivores who subside on leaves, shoots and figs.

Conservationists believe as few as 1,000 red ruffed lemurs remain in the wild, with about 600 being held in captivity.

Get in touch with our news team by emailing us at webnews@metro.co.uk

For more stories like this, check our news page

READ  'Elusive and cryptic lizard': hunt on in Melbourne for endangered grassland earless dragon
Share on FacebookShare on TwitterShare on PinterestShare on Reddit
newsgrooveApril 9, 2021