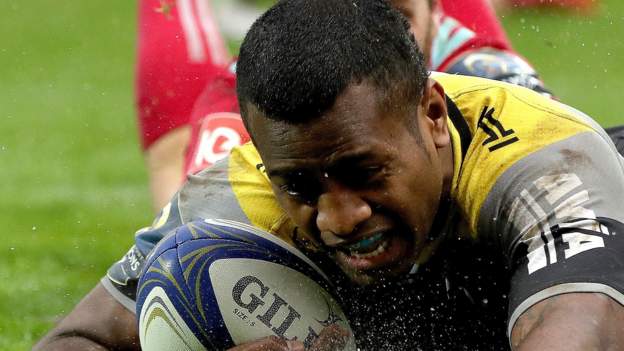 Fiji winger Kini Murimurivalu and Argentina back Matias Morini are among five new players to sign for Leicester.

Murimurivalu, 31, moves to Welford Road after eight seasons at La Rochelle and has played at three World Cups.

Morini, 25, joins from the Jaguares Super Rugby franchise and had played at the last two World Cups for Argentina.

The club has not disclosed the length of any of the deals the players have signed.

Murimurivalu, Wallace and Porter will all be available when the Premiership resumes next month having been postponed since March due to coronavirus.

Back-row Wallace spent 10 years at the Stoop before moving to Championship side Coventry last season, while England-born Porter joins from Canberra-based ACT Brumbies having lived in Australia since he was seven.

“Kini is an exciting addition to our squad and someone I am sure will light up the Premiership while representing Leicester Tigers,” director of rugby Geordan Murphy told the club website.

“He is not only entertaining in attack but also a physical, strong defensive player and adds a wealth of experience to our side.”

Former South Africa youth international Van Wyk is currently with New Zealand’s Hurricanes Super Rugby franchise and will join after his participation in Super Rugby Aotearoa comes to an end, while Morini – who has played 47 times for his country – will join once his deal ends in Buenos Aires.

“He has carved out an impressive career in the southern hemisphere, as well as featuring as a regular member of the Argentina squad since making his international debut and brings with him a wealth of experience,” added Murphy.

“Our conversations with Matias have shown him to be an impressive man, who will contribute to what we are building at Leicester Tigers off the pitch, as well as on the pitch with his work ethic and skillset.”