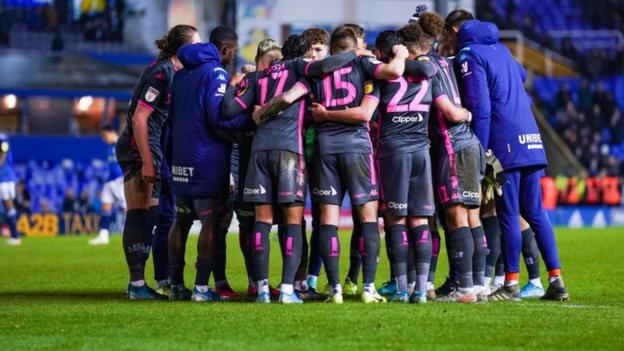 Leeds United won an astonishing nine-goal thriller against Birmingham City at St Andrew’s to go back top of the Championship.

But it was rough luck on Birmingham, who three times came from behind to level before Wes Harding’s injury-time own goal.

Marcelo Bielsa’s men will now start 2020 top of the second tier thanks to morning leaders West Bromwich Albion losing just a few miles away at home to Middlesbrough.

It looked like it might be a stroll for Leeds when Helder Costa and Jack Harrison scored inside the space of six first-half minutes.

But 16-year-old Jude Bellingham scored with his first goal in over three months to reduce the arrears at half-time before Lukas Jutkiewicz levelled on 61 minutes.

Stuart Dallas then struck on 84 minutes, only for Jutkiewicz to level again – but Harding’s own goal in the fifth minute of added time settled a classic contest.

Although without 10-goal top scorer Patrick Bamford, who suffered a dead leg in the 1-1 Boxing Day draw against Preston, Bielsa’s side took the lead on 15 minutes when they broke quickly from a Birmingham corner.

Harrison collected a loose ball after Liam Cooper nodded away Gary Gardner’s header and surged upfield before threading Costa through to turn Max Colin and bury a low, left-foot shot to Connal Trueman’s left into the bottom corner.

Harrison then made it 2-0 with his fifth goal of the season, a half volley that took a hefty deflection off Harlee Dean to wrongfoot Trueman, after being set up by Ezgjan Alioski.

But Bellingham fired home from 15 yards from Colin’s cross before Blues levelled with the first meaningful chance of the second half.

Colin’s corner was nodded goalwards by Kerim Mrabti at the far post and goalkeeper Kiko Casilla could only parry as far as Jutkiewicz, who nodded home.

Leeds were back in front when Ayling cut inside from the right flank, foxing Bela with one touch, and without any further challenge from any Blues player, was allowed to stride forward and, as the ball sat up kindly for him on the half-volley, he lashed a right-foot shot just inside the left upright.

Birmingham pegged them back again when Bela glanced in Pedersen’s free-kick, only for the unmarked Dallas to hook home from Ayling’s pass.

But, although Jutkiewicz stabbed home Bela’s cross from close range in the 91st minute to make it 4-4, Harding fired into his own net under pressure from Ayling’s cross.

Leeds are back in the Midlands on New Year’s Day for their ‘second v first’ clash with Albion at The Hawthorns.

They will start the day level on points with Slaven Bilic’s side, but with a better goal difference of just two.

Blues, who have slid to within eight points of trouble, are at home again – to bottom club Wigan Athletic.

“If you only think about the result, we’re disappointed, because we came back three times against Leeds.

“But at the same time, after playing West Brom and Leeds at home in the last 15 days, we did see a lot of things we are looking for and we need to be encouraged.

READ  European roundup: Lazio go top of Serie A while Sancho wins it for Dortmund

“We’re missing a few players still and we look a bit vulnerable at the back. But it’s about us showing the fighting spirit, resilience and good quality football we showed today, going toe-to-toe with the team that at the minute is on top of the league.”