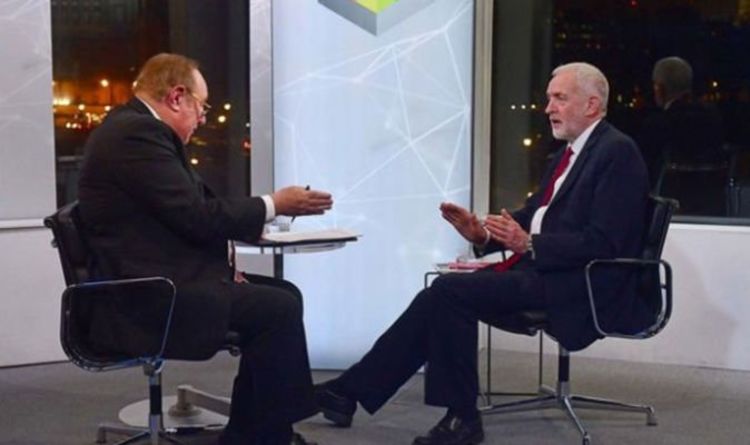 The BBC faced backlash on Twitter from Labour supporters who vented their fury at the Corporation for their failure to pin-down Mr Johnson for an interview with Mr Neil. The BBC tweeted this afternoon: “As part of our series of leaders’ interviews, we have dates for two more next week. Andrew Neil will interview Liberal Democrat leader Jo Swinson and Brexit Party leader Nigel Farage.” They added: “For those asking when Boris Johnson’s interview will take place, we’re in ongoing discussions with his team but we haven’t yet been able to fix a date.”

“Turns out no such agreement had been reached.”

Labour supporters were quick to vent their anger at the BBC in a flood of tweets.

One, referring to TV debates and then Mr Johnson, said: “You shouldn’t be doing any of these until all the leaders have confirmed.

“If he doesn’t do it this is another political mess for the BBC. Why undermine yourselves like this?”

Another added: “So, you mean that you went head interviews with the other leaders before getting the Tory leader to agree to one.

“So he now has the option not to face @afneil? If he doesn’t do the interview, where is your balance?”

A third said: “They aren’t journalists. Political gossip columnists at best. The BBC is finished.”

READ  Parliament: MPs to get an extra £20m for staffing costs

Mr Corbyn was questioned by Mr Neil about the long-running issue of anti-Semitism in the Labour Party and declined to apologise while rejecting claims that anti-Semitism had risen in the party under his leadership.

Mr Corbyn’s interview with Mr Neil aired on BBC1 at 7pm on Tuesday evening and has already been torn apart by British voters.

During the interview, the Labour leader failed to apologise to the British Jewish community, despite the host promoting him six times to do so.

Mr Corbyn also stumbled on questions over how Labour will fund their ambitious spending proposals.

The Labour leader admitted his tax policies would, in fact, mean some people on less than £80,000 per year would see effective increases.

Mr Neil pressed on his claims that only the richest would pay more, Mr Corbyn acknowledged that his plan to scrap the marriage tax allowance, for example, would actually mean people on lower incomes losing a £250-a-year relief.

He said: “They will also be getting a pay rise when we bring in a living wage.

“They will also be getting improvement in free nursery provision for two to four-year-olds.

But when challenged on Labour’s huge spending spree, Mr Corbyn admitted that some of Labour’s plans will require borrowing.

Shadow chancellor John McDonnell today admitted plans had been “underestimated” in a statement.