‘Kraftwerk never stopped being about the future’ says Sven Väth

AS the end of the summer season appears on the horizon in Ibiza some of the best parties are yet to come.

This year Sven Väth and COCOON have been celebrating 20 years on the island with a series of events at Ushuaïa Ibiza alongside the 20th instalment of their white isle residency at superclub Amnesia after a hiatus last year at Pacha.

Together, COCOON and Ushuaïa Ibiza are preparing for an unmissable prospect at the open-air venue on Friday, September 13 as Sven Väth is joined by the revolutionary Kraftwerk to continue the COCOON celebrations.

Kraftwerk have influenced everyone from Daft Punk to David Bowie to Madonna and Coldplay. So many artists have either been inspired by them or have sampled their work, and tracks of theirs like ‘Trans-Europe Express’ provided some of the building blocks for the birth of hip-hop. Sven Väth told us:

‘I was listening to Kraftwerk for the first time in 1981 It was the album “Computer World” that became a massive inspiration for me in sound and dancing the robot of course. I have followed their work ever since.

If you ask anyone from Berlin-Detroit-London-Tokyo-New York etc… Kraftwerk will always been named as the first for the electronic music movement! With all these memories and the influence they had on my life it is such a huge moment to present them at the 20th anniversary of Cocoon. We represent the past and the future this season. Kraftwerk never stopped being about the future!’

Sven can be seen as one of the successors of Kraftwerk’s legacy in placing German electronic music on the map, helping do what they did for electro and synth music for techno. It’s a perfect fit, and makes for the kind of night Ibiza has never seen before. To complete the line up for this gigantic Ibiza occasion, Seth Troxler will also perform.

Tickets for this unique event in Ibiza are still on sale but will sell out very soon. HEAD HERE for more info. 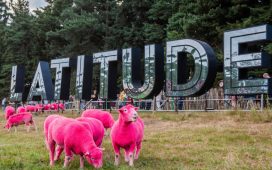