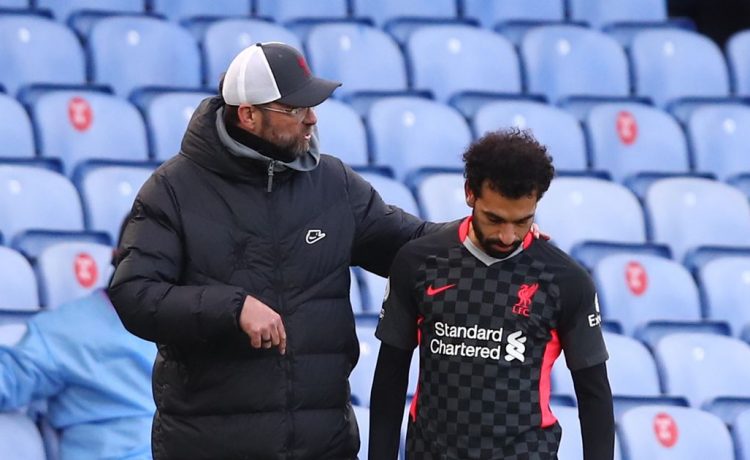 Jurgen Klopp has revealed he held clear the air talks with Mo Salah, and insisted: “He is in a good mood, he is laughing in training, everything is fine.”

The star striker admitted his disappointment recently, in an interview with a Spanish paper, at being overlooked for the Liverpool captaincy, which was instead handed to local boy Trent Alexander-Arnold.

Salah also refused to rule out a move to either Real Madrid or Barcelona, saying only: “Who knows what will happen in the future”, but Klopp spoke at length to the Egypt international, to explain his reasoning about the captain’s armband.

“Trent got the captaincy because he was longest in the club. I spoke to Mo afterwards about it. Not before, but afterwards, when I realised it didn’t work out that well.

“And we clarified that, and he said it in obviously an interview again, and that is not a problem for me.”

Klopp admitted that he didn’t realise the armband would cause such a stir, and explained that there is a clear pecking order as captain, with Jordan Henderson, James Milner, Virgil van Dijk and Gini Wijnaldum in that order.

When all of them were missing for the Champions League tie in Denmark against Midtjylland in December, Alexander-Arnold was made skipper, and Salah responded by revealing his “disappointment” at the decision.

Will Salah still be at Liverpool next season? Have your say below.

Much was made of those comments when the forward was then left out of the visit to Crystal Palace, but Klopp said: “Mo is a very important player for me obviously, but this story around him isn’t.

“There’s always things to talk about, he didn’t start the last game, and then I hear all these things that could be the reason. “If you had seen him in training today you would have seen him laughing a lot! He’s in a good mood, a good moment, in really good shape.

“It really is all fine.”