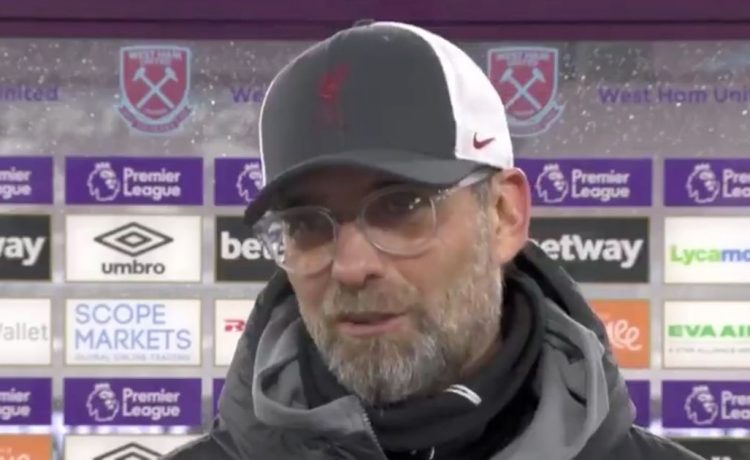 Salah struck twice in the second half in the 3-1 win at West Ham to send Liverpool up to third.

It boosts their hopes of retaining the title with a £2million move underway for Preston defender Ben Davies to help their injury-hit defence.

Egyptian Salah now has 21 in all competitions this term as Georginio Wijnaldum made it 3-0 before Craig Dawson got a consolation.

He is the first Reds player to score 20 or more goals in all competitions in four consecutive seasons for Liverpool since legendary marksman Rush did so six times from 1981-87.

Liverpool boss Klopp reflected: “I am not surprised. I work on a daily basis with him.

He will never stop having a massive desire for scoring goals. He is a world-class player.”

Salah’s goals were his first in the top-flight in seven games and inspired Liverpool who were without the injured Saido Mane.

He opened the scoring with a left foot curler into the far corner in the 57th minute and added a second on 68 minutes after a sublime first touch from Xherdan Shaqiri’s pass.

Klopp added: “I always said in the last few weeks when we didn’t score that many, the only thing you can do is try and try again. We didn’t force it.

“The first goal was a proper smart goal, top-class.

“His second goal, what a counter attack and his first touch was outstanding, world-class.”

READ  Paes, 46, announces 2020 will be his final year as a professional

Salah’s goals completed successive 3-1 away League wins after beating Spurs after losing at home to Burnley and going out of the FA Cup at Manchester United.

It keeps up the pressure on in-form leaders Manchester City who visit Liverpool on Sunday.

Salah said: “City were struggling at the beginning now we were struggling three or four games ago, you just need to keep winning if you want to win the Premier League. This was a big week.

“It is a good win for us playing away.”

Salah admitted he needed to step up with Roberto Firmino on the bench and Mane out.

“I try every game to help the team but because we didn’t play both of them it was a big responsibility,” he added.

It followed Joel Matip joining Virgil van Dijk and Joe Gomez on the injury list and Klopp is now moving for Davies, aged 25 , who has made 19 appearances for Preston this season.