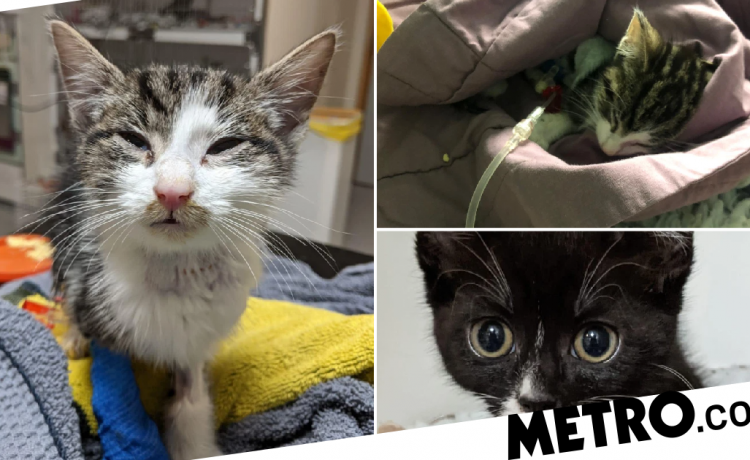 Two kittens who were taken from their mum far too early suffered greatly as a result, with one passing away.

Kittens Marco and Mercedes were sold online and separated from their mother when they were just four weeks old.

By the time they were six weeks old, the pair were suffering from diarrhoea and not eating.

Their owner rushed them to Blue Cross’s animal hospital in Victoria, London, where the team did their best to care for them.

The owner had first tried to get help from a vet just a week after getting the kittens, but eventually signed the kittens over to the care of Blue Cross as they could not afford to visit their private vets again.

When Blue Cross took him in, Little Marco weighed just 570g, was dehydrated and riddled with fleas and worms.

He was treated by the team for suspected anaemia and put on a drip immediately to try to rehydrate him.

Unfortunately, the poor little guy was too weak and kept collapsing, and the team were ultimately unable to stabilise him.

However, after a week in the hospital, his sister was thankfully able to recover and was transferred to a foster home.

She’s since found a new forever home where she is happily settling in, and has been renamed Bella.

Amanda Rumball, London welfare officer at Blue Cross, said: ‘It’s heartbreaking because these tiny kittens were taken away from their mum far too young. We would never advise rehoming kittens under the age of eight weeks.

‘The owners did what they could for these tiny kittens, but poor Marco was so weak the team were simply unable to save him. Luckily his sister Mercedes has managed to battle through.

‘Unfortunately, pet scammers are continuing to look for every opportunity to cash in on demand for pets wherever they can with no thought for the animal’s welfare.’

The charity’s Victoria hospital has also recently treated a 10-week-old Sphynx kitten for sickness and diarrhoea a week after his owner bought him online,.

A newborn puppy also tragically passed away despite the team’s best efforts after he was found abandoned in a park with his umbilical cord still attached.

With demand for pets having risen massively thanks to the pandemic, prices for a puppy soared to an average £1,883, while prices for kittens range from between £400 for a cross-breed to £2,500 for a pedigree cat.

Alison Thomas, head of veterinary services at Blue Cross, said: ‘Prospective pet owners must beware of sinister sellers out there who breed animals purely for profit with little concern for their welfare. The devastating consequences include crippling vet bills and, in the worst cases, animals having to be put down.

‘It’s vitally important that people not only research the breed of animal they want but also the person selling it to them.’

Becky Thwaites, head of public affairs at Blue Cross, said: ‘Unscrupulous breeders and sellers are taking advantage of the increased demand for puppies and kittens. And, where responsible breeders have been stopping, or reducing breeding due to concerns over being able to find the right homes ethically, criminals have been taking advantage.

‘Many buyers are simply not receiving the pet they think they have bought and many are also purchasing ill, or even dying animals as criminals just look to make money and exploit the current environment, with no welfare concern. We can’t stress enough how people need to do their research.’