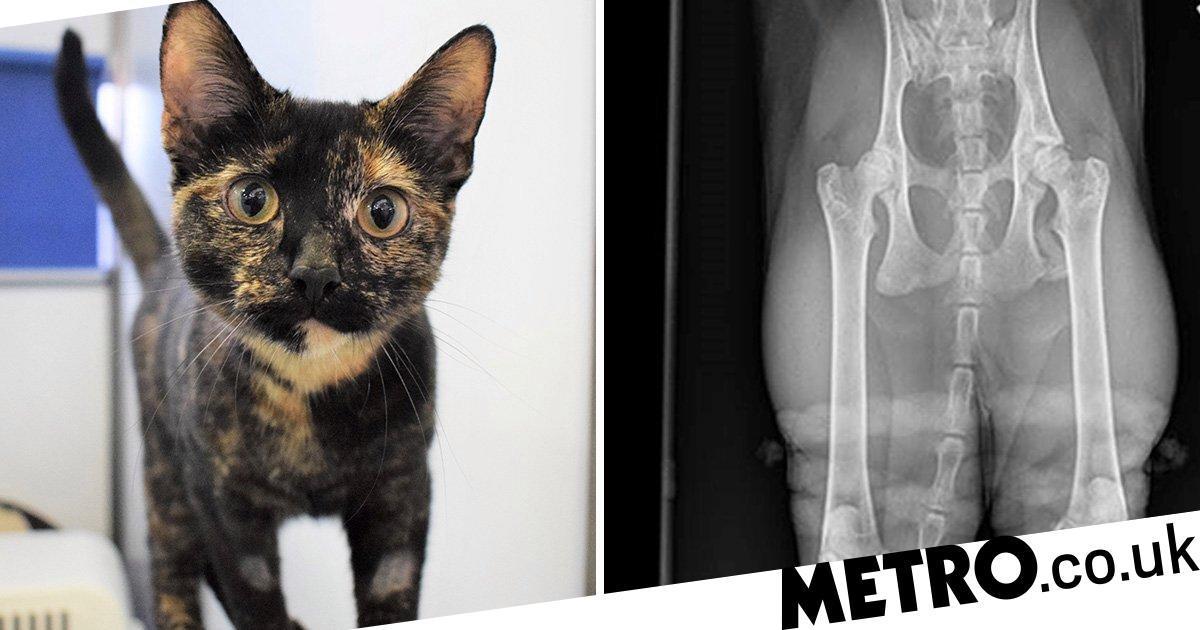 A kitten was abandoned by her owners after falling out of a window on the eleventh floor.

Despite surviving the 120ft fall, seven-month-old May had to be rehomed because her owners couldn’t afford the vet bill to fix her broken pelvis.

May’s owners took her to Battersea Dogs & Cats Home after the fall, where staff rushed the kitten to a clinic.

An expert veterinary team performed emergency surgery to realign her pelvis which was fractured in several places.

X-rays from before and after the operation show May’s fractures completely healed and her skewed spine straightened.

May went to stay with a foster carer to allow her to recover in a home environment after the procedure, which left her with no lasting damage.

The whole ordeal has not phased May, who was back on her feet just days after the surgery.

‘It’s not often that we hear of cats who have fallen from eleven storeys high, however cats climbing to great heights or jumping out of windows and injuring themselves is not unheard of.

‘Owners who live above ground floor level would do well to remember to keep their easily accessible windows shut if their cat has an adventurous nature, or at least create a barrier to prevent their pet from exploring further if there is a danger of them falling out.’

The lucky kitten has now been rehomed after catching the eye of Collin Goodhew and his family, from Berkshire.

Collin said: ‘After we brought May home, we tried following Battersea’s advice and keeping her in one room so that she could get settled in, but after a few days it was clear that she desperately wanted to explore the rest of the house.

‘She likes to follow me from room to room and tries to climb everything – including the gap down the side of the bed.’

While it is not certain, May’s injuries would suggest that the tiny kitten landed on her feet.

Cats have an innate ability to orient themselves as they fall in order to land on their feet, and often end up with only pelvic or jaw injuries despite dropping massive distances.

Due to their lightweight frame and fur, cats will only reach a maximum of 60mph when in freefall – half the 120mph terminal velocity of an average person.

As a result, as long as the cat has a long enough drop to right itself, they tend to survive falling distances that would be fatal to other similar-sized animals – known as high-rise syndrome.

MORE: Fanta is launching a jet black version for Halloween