According to court documents Us Weekly claim to have seen on Friday, a judge signed off on the Kelly and Brandon’s single status last month, while their ‘marital or domestic partnership status’ will end on January 7, 2022.

This is per a motion Kelly’s lawyer filed in July for a separate trial to terminate her marital status so that she would be declared single while divorce proceedings continued.

The 39-year-old Breakaway singer filed for divorce from her 44-year-old husband of seven years in June 2020.

She and Brendan share two children, daughter River, 7, and son Remington, 5, and have been going through fraught legal proceedings since the divorce process began.

In August, Kelly filed for a judge to legally restore her last name, and in July she was ordered to pay Brandon nearly $200,000 (£145k) a month in child and spousal support.

According to TMZ, Brandon had requested $436k per month.

As per the filing, it’s the American Idol winner’s staggering $1,583,617 per month in income means she is required to pay former music manager Brandon such high spousal support, which began back on April 1, 2021.

Daytime talk show host Kelly is reportedly looking to get back out there on the dating scene soon, with a source telling Us Weekly that the music star is looking for ‘a younger, up-and-coming country singer [who] understands the business’.

The popular singer came under fire earlier in September from passionate BTS fans after her show mistakenly shared a photo of the K-pop band Blitzers while discussing Coldplay and BTS’s new collaboration, My Universe.

After seeing the messages online, a message was posted on the official The Kelly Clarkson Show Twitter account which read: ‘Thank you #BTSArmy. We’re sorry, and we’ve provided our stations with the correct image.’


MORE : Michael K. Williams’ cause of death confirmed to be accidental drug overdose 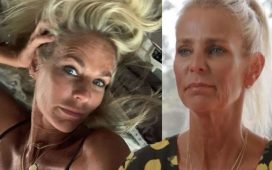