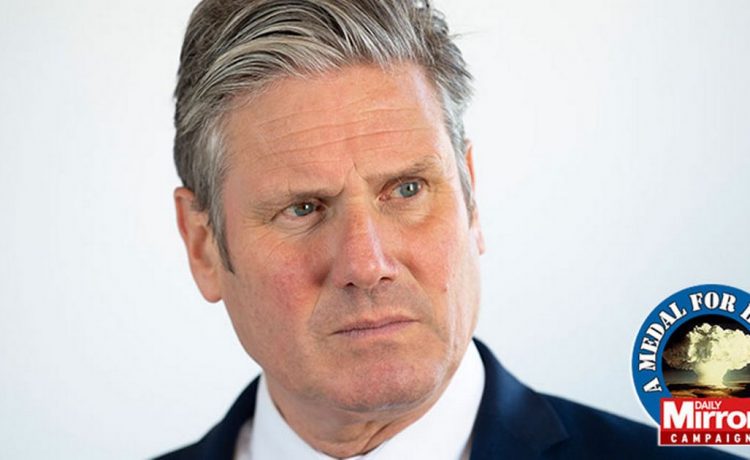 Labour leader Sir Keir Starmer has vowed to win justice for nuclear test heroes after meeting them to hear about the longest-running scandal in British history.

He banged the table as he insisted: “The country owes you a huge debt of honour. Your campaign is our campaign. It starts now.”

And he pledged to do all he could to ensure that Prime Minister Boris Johnson meets the nuclear veterans to hear their evidence for himself.

The historic meeting was the first time any party leader has met with those affected by the UK’s nuclear testing programme, which ran from 1952 to 1991 in America, Australia, and the South Pacific.

Veterans have a legacy of cancers, blood disorders and rare disease, while their wives report three times the usual rate of miscarriage.

Studies have shown their children have 10 times the normal amount of birth defects and are 5 times more likely to die as infants.

The meeting came after the veterans challenged the PM to “look me in the eye” and explain why last year they were refused a medal on the grounds there was no “risk or rigour” in the atomic trials.

Johnson has ignored requests from his own backbenchers, cross-party MPs, and the veterans to arrange a meeting with them.

But Sir Keir was happy to do so, and they were invited to meet him along with Shadow Defence Secretary John Healey and constituency MP Rebecca Long-Bailey.

They met John Morris, 84, who was wrongly arrested over the cot death of his son Steven after serving at Operation Grapple. He witnessed four nuclear explosions, including the UK’s first H-bomb, while serving in the camp laundry at Christmas Island in 1957.

He has since been diagnosed with cancer, and aged 26 developed pernicious anaemia, a blood disorder linked to radiation.

“We washed the scientists’ contaminated coats in with the uniforms for everyone else. We drank desalinated seawater, and the sand got in all our food,” said John, from Rochdale. “I have always wondered if I gave my son something that killed him. I’ve spent 60 years fighting to be heard, but no-one will give me the answers.”

And they heard from Steve Purse, who was born with myriad physical deformities no doctor has been able to diagnose after his father David was sent to run the airfield at Maralinga, South Australia, in 1962.

The site was used for the ‘minor trials’, a series of 600 experiments on nuclear triggers. David served at Operation Vixen B, a series of 12 so-called ‘safety experiments’ testing what would happen to the nuclear bomb cores if something went wrong.

The tests left the Outback littered with 22kg of plutonium-239, which has a radioactive half-life of 24,100 years. It was later subject to repeated decontamination before it was finally returned to its traditional owners in 2014. Some parts are still uninhabitable.

Steve told him that veterans had been ignored for decades, adding: “We need our faith restored in politicians. We need more than just a nod of the head and being brushed under the carpet again, we need action. It’s too late for my dad, he died in 2015, but he carried guilt because he blamed himself for me. That was unforgivable, for any civilised nation that will allow its men to die with that shame.”

Sir Keir was visibly moved to hear Steve had decided never to have children for fear of passing his deformities on, but had recently fallen in love, married, and had a healthy baby boy, Sascha, born just 8 weeks ago.

“When we went for the scans I was constantly worried about how long his limbs were, and when he was born I was checking him all over. All parents do that, I know. But when I was a baby I screamed like crazy because I had hydrocephaly and was in a lot of pain, so every time Sascha cries I worry if he’s developing it,” Steve told him.

“And I know our kids have higher risks of cancer, so I’m going to be terrified about this for years to come, and when he has kids of his own.”

Sir Keir said: “I’d like to say a huge thank you for your service. The country owes you a debt of honour. And I’m sorry for what you and your families have been put through, not only with the testing, but the absolute failure to support, recognise or address what came afterwards, which just rubs salt in the wounds.

“The terrible decision to not award a medal was politically wrong, and morally completely wrong. The Prime Minister must now meet you, hear what you have to say, and do what it takes. We will support you all the way.”

The Mirror has campaigned for justice for the veterans since 1983 when they first came forward to reveal what had happened to ‘the babies of the bomb’. Prime Minister Margaret Thatcher ordered research into cancer rates but veterans say it is deeply flawed, as it failed to consider sterility, birth defects, and other life-limiting diseases.

In 1990, Labour leader Tony Blair backed a law that would have granted compensation to survivors. But once in power he turned his back on them, and said there was not enough evidence.

The Mirror asked Sir Keir if he would stand by the veterans if he became Prime Minister. “Yes,” he said firmly. “I’ve seen too many examples of this sort of injustice.”

He spoke about the burden of lifelong harm from wondering about unborn children, and reacted with disbelief when told that, to qualify for a small war pension, nuclear veterans were asked to provide evidence of their own radiation dose.

“How could anyone possibly expect you to be able to do that?” he asked.

Read the full story of the nuclear tests: DAMNED

Alan Owen, founder of the Labrats campaign group, told how his father Ronald served at Operation Dominic in 1962, a series of 31 nuclear tests carried out by the US with troop support from the UK, with a total yield 2,500 times that of the bomb which levelled Hiroshima.

“He died aged 52 of a heart problem, my brother died at 31 from the same problem, and my sister Laura was born blind in her left eye,” he said. “The US gave my family $75,000 compensation, but his own government has airbrushed him from history.”

For more than 30 years the Mirror has campaigned for justice for the brave men who took part in Britain’s nuclear weapons tests.

The Ministry of Defence has fought back every step of the way.

We have told countless heartbreaking stories of grieving mums, children with deformities, men aged before their time and widows struggling to hold their families together, all while campaigning for recognition.

Two years ago we launched an appeal for a medal for the 1,500 survivors.

For the first time we were able to prove some were unwittingly used in experiments.

Our appeal was backed by then-Defence Secretary Gavin Williamson but his review foundered after he lost his job.

It had only six meetings in two years. They never asked to meet veterans. They never questioned the evidence.

Instead they asked for information from the MoD, which has a track record of denying what its own paperwork later proves.

Would anyone working in Whitehall today stay there, if 3 megatons of plutonium exploded south of the river?

The test veterans and their families will never stop fighting. The Mirror will never cease to demand they are heard.

Prime Minister, listen to them. Overturn this disgraceful decision.

John revealed he had applied for a war pension which he expected to be refused, and added: “They haven’t given me even 75 pence. But it means a lot that, after all this time, we’re able to sit here and you’ve said thank you.”

In 2019 the Labour manifesto promised a £50,000 lump sum to all surviving veterans. Shadow defence secretary John Healey said: “All three of us in this meeting were in the shadow cabinet that signed off on that manifesto. We all backed it.”

Sir Keir promised that, under his leadership, Labour would go further. “That’s just the starting point. We must do more,” he said. “The next election is two or three years off and something practical must be done before then.”

The meeting ended with a promise to come up with a plan to win justice for the veterans before October next year, which will see the 70th anniversary of the UK’s first atom bomb, codenamed Operation Hurricane., which launched us into the arms race in 1952.