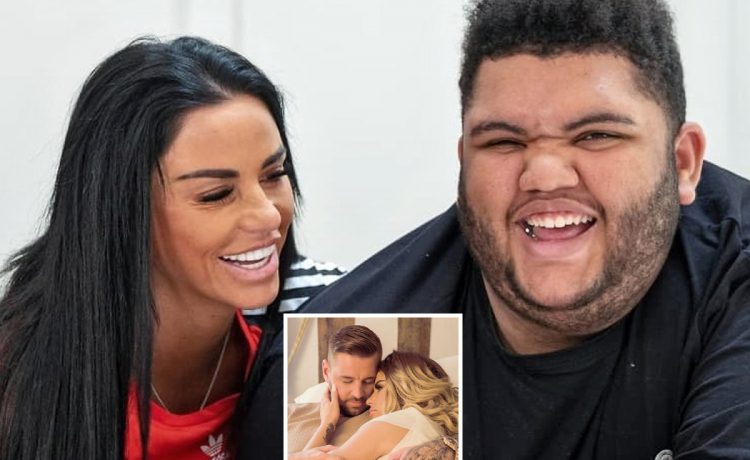 KATIE Price’s son Harvey can be seen giggling as he mocks her romance with Carl Woods kissing his hand and calling her Dolly.

The 18-year-old had his mum in “stitches” as he did a very accurate impression of her and boyfriend Carl being packing on the PDA.

Katie, 42, shared the video with her 2.4million Instagram followers alongside the caption: “Harvey has me in stitches… especially when he takes the piss out of me and @carljwoods because Carl calls me dolly”

In the video Harvey nails his impression of the loved up pair, saying: “Oh babes…. I love you Dolly,” before kissing his hand with lots of smooching noises.

Fans of Harvey and Katie were loving the hilarious impression and reaction and rushed to share their laughter with them both.

One follower wrote: “Ahh so funny love his cheeky sense of humour.”

“He is hilarious!,” added another.

While a third gushed: “Harvey makes me laugh so much!”

Fans of Katie and Harvey are set to see an inside look at the mother and son’s relationship tomorrow evening in a new documentary, Katie Price: Harvey and Me.

During the show Katie discovers that Harvey, who has Prader-Willi syndrome, could be sectioned under the Mental Health Act.

While the the syndrome itself isn’t life-threatening, its symptoms can cause complications such as compulsive eating and weight gain.

According to The Mirror, Katie tells the cameras: “This is bad. Hearing some stories on people who have been sectioned is awful.

“I can see they’ve got similarities to what Harv is like. They were scared.”

Katie later goes on to research the case of 15-year-old Matthew Garnett, who spent 15 months under section in a mental health inpatient unit.

Meanwhile, the star explained this month that Harvey would be moving to a residential college, saying that he had reached “crisis point” looking after him.

The mum of five explained she is trying to get him used to “independent living” before he goes away.

She said: “I’ve got him his own little house at the minute. It’s opposite where we live. It’s got all cameras in it.

“There’s a carer who’s known him for seven years from school. He’s got his own kitchen. It’s a three-bedroom house, so that’s the start of his independent living.”