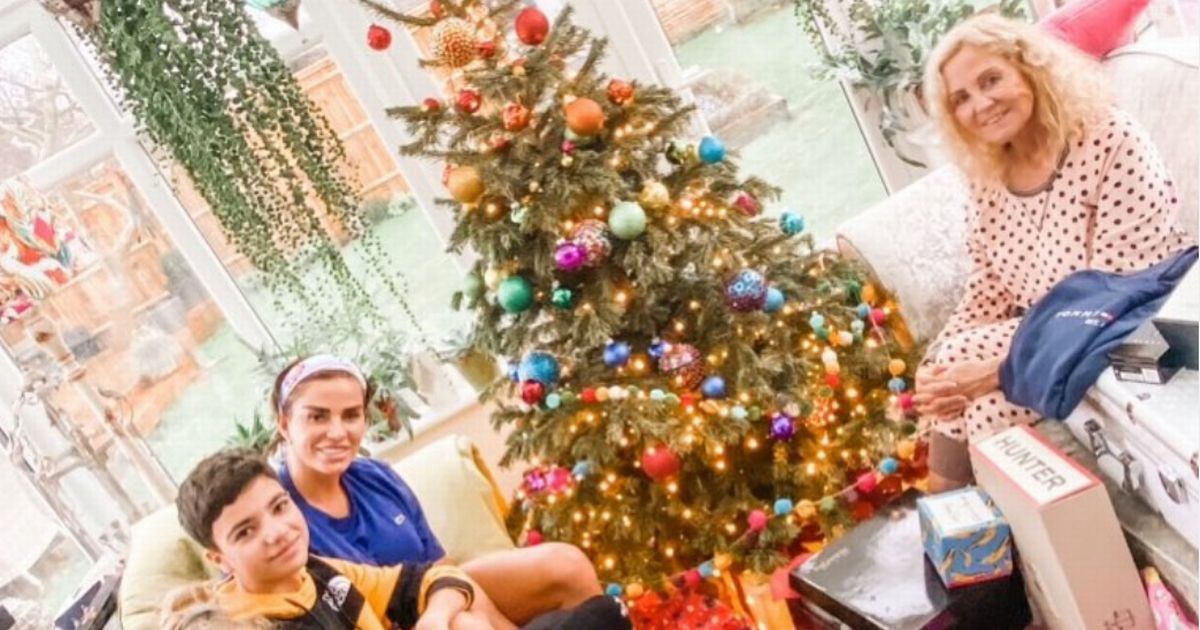 Katie Price ‘s Christmas was not as merry as she would’ve hoped it to be this year, as she revealed some worrying news about her mum’s health.

After sharing a festive snap to her 2.1million Instagram followers, supportive comments rolled in from fans as Katie spoke of the hardship of co-parenting in addition to her mum Amy Price’s terminal illness.

One person commented: “Lovely pic Katie hope your mum is doing ok she looks so well!! Amy you are an inspiration to others stay strong and positive x.”

Katie wasted no time in replying, writing: “Thank you, she is an incredibly strong person. She only has 42% capacity left of her lungs. I must get my strength from her.”

Amy, 65, is battling terminal idiopathic pulmonary fibrosis, and she has said she is making the most of the time she has left after being given a five-year prognosis in 2017.

The condition causes scarring to the lungs, making it harder to breathe.

The cold English weather made breathing even harder for Amy, so she now lives full-time in Spain.

The former glamour model, 41, admitted it was difficult not being able to have all of her children surrounding her at Xmas.

This year the mother-of-five only had one of her children – Harvey Price, 18 – at home while the other four stayed with their dads.

Junior and Princess were at home with Peter while Bunny, five, and Jett, six, cuddled up on the sofa with their father Kieran Hayler.

Katie wrote: “Boxing day is all about chilling with the family. Anybody who co-parents knows how hard it is when it’s not your turn to have them on Christmas Day but we’ve more than made up for it today.”

Bunny and Jett appeared to be staying with their dad for Boxing Day.

Earlier this year, Amy and Katie appeared on Loose Women, where Amy revealed she is currently unable to get a lung transplant.

Amy loves exercise, and she said she may have to be put on oxygen for it in the future.

“I’m not too bad, I went for tests this week with the transplant team, my lung function has dropped slightly but that’s to be expected,” she said.

“They test other organs to prepare you if you need a transplant, they’re still 100% fine. At the moment they’re saying you’re too healthy, go out and enjoy yourself.

“When you first hear ‘terminal’ you think, oh god it could be next week, next month…”

Amy is now hoping to be put on a trial for a new research drug, but doesn’t hold out much hope for a donated lung, because “you need to be nearly dead to get a transplant”.