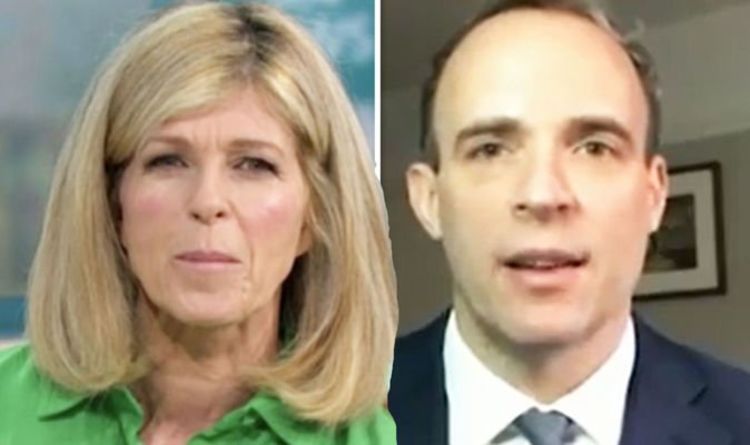 Good Morning Britain host Kate Garraway engaged in an on-air clash with Dominic Raab as she asked the Foreign Secretary to “clarify” the Government’s mandatory quarantine policy. The minister hit back at the ITV anchor, saying he was fed up with the “media” not allowing politicians to give “honest answers.”

The 53-year-old has since spoken out about the pair’s on-air row as the presenter reacted to a viewer who took aim at the Government Minister.

Kate admitted she was “glad she wasn’t the only one” who noted that Raab didn’t give a definitive answer to her questions.

In view of her 435,000 Twitter followers, the mum-of-two retweeted a message from a social media user who claimed the Foreign Secretary would always fail to answer a question straight.

The person in question wrote: “Question to Raab… ‘Is the cat black?’

“Sadly I switched off this morning. Tired of GMB’s government agenda,” another said.

During the pair’s heated exchange on GMB today, the interruption from the host over mandatory quarantine policy, saw Raab snap back “Will you let me answer?.”

READ  No, Justin Bieber isn’t training to become a Hillsong minister
Share on FacebookShare on TwitterShare on PinterestShare on Reddit
newsgrooveFebruary 17, 2021