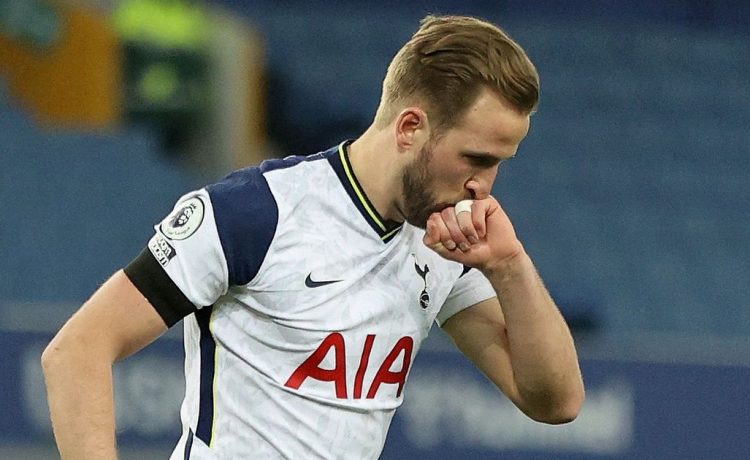 He is now the striker to have scored the MOST goals in the Premier League without winning it, taking away Fowler’s unwanted stat in that regard.

With the two Manchester clubs hot on his trail, the lack of trophies at Spurs is something he will have to now address, especially without Champions League football next season. An all time great deserves better.

His delightful first half finish took him to 20 league goals for the season, and into an elite club of just four strikers in the Premier League era to score 20 or more in at least five seasons. The others to have achieved that remarkable feat – Alan Shearer, Sergio Aguero and Thierry Henry -means he’s in the same breath as the greatest.

His second goal – and even better finish – put him past Fowler on 164, and to be in that company without winning a single trophy is astonishing… and unthinkable.

Everton would certainly agree with his status…and Michael Keane certainly is. He inadvertently provided the assist when he flicked Ndombele’s cross into the path of the Spurs striker, a gift which Kane took with all the enthusiasm of a kid at Christmas.

Yet if their centre forward is Tottenham’s greatest strength, then their failings were clear to see. Everton were the better team, and should have won – would have won had not Richarlison missed a sitter right at the end.

They were level within four minutes when the outstanding Sigurdsson teed up James to shoot, and Sergio Reguilon foolishly challenged from behind. Sigurdsson doesn’t miss from the spot, and his finish was emphatic.

From there, Everton controlled the game for long periods, but Richarlison missed three chances, his belief evaporating.

Sigurdsson had shown him how to do it, with a goal of the season contender, as he caressed sub Seamus Coleman’s cross into the far corner with a touch that would put a crying baby to sleep, to put the Blues ahead.

But Kane wasn’t finished even if Spurs looked for all the world as though they were. Again Keane made a mistake, this time heading sub Lemela’s cross into Holgate on consequently into the path of the striker, who finished with the killer instinct of the very best.

Kane limped off right at the end. If it is serious, this could even be his Spurs swansong…and perhaps that of his manager too. The watching Gareth Southgate will be praying it isn’t, with the Euros looming.