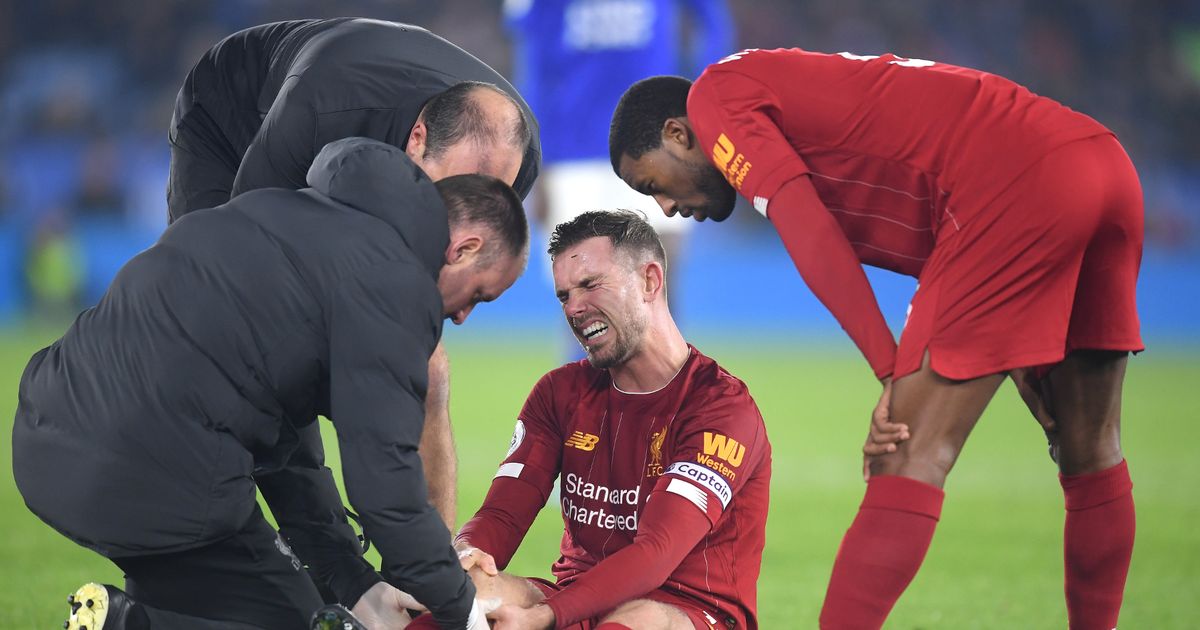 Jurgen Klopp has provided an injury update on Jordan Henderson after Liverpool beat Leicester 4-0 to go 13 points clear at the top of the Premier League.

Henderson was replaced by Adam Lallana with eight minutes remaining after the Liverpool captain took a kick to the shin.

But Reds boss Klopp has reassured fans his skipper will be available for Sunday’s Anfield clash against Wolves , as Liverpool aim to push in search of their first title triumph for 30 years.

Klopp said of Henderson: “Jordan is okay. He got a kick on the shin, it was bleeding afterwards. He said he could have played on!”

The Reds boss is targeting more silverware after his side’s dominant display against their nearest challengers.

The unbeaten Premier League leaders ran out emphatic winners with a brace from Roberto Firmino plus a James Milner penalty and a Trent Alexander-Arnold scorcher.

Klopp was relieved after a hectic schedule in which the Reds visited Qatar, where they added the Club World Cup to their Champions League and Super Cup crowns.

“We tried everything to leave some energy in the boys – that worked out,” said Klopp.

“We really suffered so I was happy we could do it like we did.

“We made a decision a while ago that we don’t really think about things we have now like the Champions League, Super Cup or World Cup.

“We are in a moment when we try to win a few things and afterwards we can think about how it felt.”

Liverpool’s win on Boxing Day was the biggest margin of victory in a clash between teams starting the day in the top two since Manchester City beat Manchester United 6-1 in October 2011.

England ace Alexander-Arnold, who also got two assists, said: “It was probably our best game of the season.

“You don’t really think you are going to be 13 points ahead but we are not going to take it for granted.

“We have to keep going and try to push that advantage to the most we can.”

Second-placed Leicester failed to have a single shot in the first half as Firmino headed in to break the deadlock on 31 minutes.

Liverpool ran out comfortable victors as Milner struck from the spot in the 71st minute before Firmino fired in on 74 minutes, and Alexander-Arnold completed the rout 12 minutes from time.

Milner added: “Trent is getting better all the time. He is still a young lad and is unbelievable.

“There is plenty more to come and we are on him to keep improving.”

Foxes keeper and captain Schmeichel felt the penalty for a handball by Caglar Soyuncu was a harsh decision by referee Michael Oliver.

The Dane said of Liverpool’s title hopes: “They are a top side. It’s there’s to lose isn’t it?

“But I think it was a bit tough.

“We were in the game until the referee had to make himself a hero. Then we lost our composure.

“Caglar had less than a millisecond to react. He is desperate to give it – once he does they are never going to turn it over.”