Joy Corrigan: Model appears to reveal FAR too much as cleavage spills out of tiny top 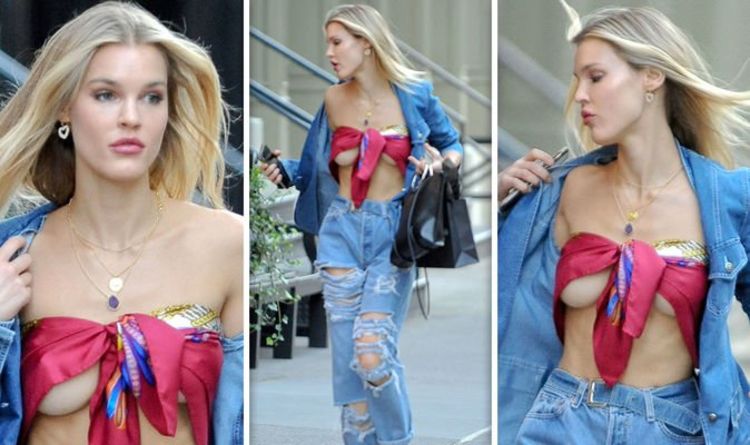 Joy Corrigan’s ample assets were definitely on display when she was spotted strolling around New York’s Soho district.

The US model was seen shopping at What Goes Around Comes Around before emerging in an eye-popping ensemble.

Wearing her blonde tresses down, the 24-year-old appeared to spill out of her top, which did little to hide her cleavage.

She was seemingly oblivious to her mishap as she strutted down the street solo, after posting a number of videos to Instagram.

Joy opted for a handkerchief style top, which highlighted her incredibly toned tum and was knotted at the cleavage.

However, she exposed serious underboob after the cropped number appeared to rise up and come out of place.

Thankfully she teamed the racy get-up with a loose-fitting denim jacket, which she wore sexily off one shoulder.

It matched her high-waisted jeans, which were belted and came complete with numerous slashes along the front.

She polished off her outfit with a number of delicate gold necklace, dangly earrings and sexy black heels.

Joy had shared a selfie in the same look with her 682,000 followers, as she pouted away without revealing too much.

In a video, she was heard telling a companion simply, “I love it,” as she tried on a cream jacket in the mirror.

Later in the day she teamed up with two female pals for dinner, with them both wearing white crop tops with jeans as she stood in the middle.

The trio appeared to be having a great evening, sharing a number of kisses on the cheek as they beamed for a fun clip.

Two days earlier, Joy was pictured in a very chic frock for the second day of the US Open 2019.

Joy’s trim shape was impossible to miss in a backless pink top, which came complete with a cuff neckline and knot detailing.

She wore it with sparkly bottoms and a chain strap handbag for the annual sporting event, which runs until September 8.

The match saw Rafael triumph over his opponent in a straight-set first round match.

Joy is known for her modelling career and Instagram profile, after working for brands including Argento Beachwear and Liliana Montoya.