Jose Mourinho claimed other teams and players get “lucky” against Tottenham after Norwich’s Todd Cantwell escaped a red card on Wednesday.

Tottenham were a goal up thanks to Dele Alli’s 38th minute opener, when Cantwell was penalised for a lunge on Erik Lamela.

The Norwich midfielder caught the back of Lamela’s calf with his studs, having missed the ball, which resulted in a lengthy VAR check for serious foul play.

Cantwell was relieved to get away with just a booking, before later colliding with Harry Winks, forcing the Tottenham star to hobble off injured.

When asked his opinion on Cantwell’s tackle on Lamela, Mourinho told a press conference: “Normally players and teams that play against us, they are all lucky.

“To be honest it was too far from me, I didn’t watch it on TV. I don’t want to say anything about it.”

VAR was called into action again soon after Cantwell’s foul, when Ryan Sessegnon brought down Max Aarons in the box.

Despite a four-minute delay VAR supported referee Chris Kavanagh’s decision to award a penalty, which Teemu Pukki slotted past Hugo Lloris to level the scores.

Mourinho added: “I don’t want to say anything about the penalty. I was obviously too far, I didn’t watch on TV yet.

“The only thing i want to say is that normally players and teams they are lucky against us.

“[Etienne] Capoue was lucky, Watford was lucky, [Andy] Robertson was lucky, Liverpool was lucky. Normally teams are very lucky against us.”

Dele Alli’s shot was blocked by Christophe Zimmerman, but looped over Norwich keeper Tim Krul, where Son was waiting at the far post.

The win was Tottenham’s first in five league games, while Norwich remain rooted to the bottom of the table. 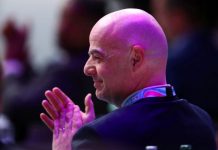