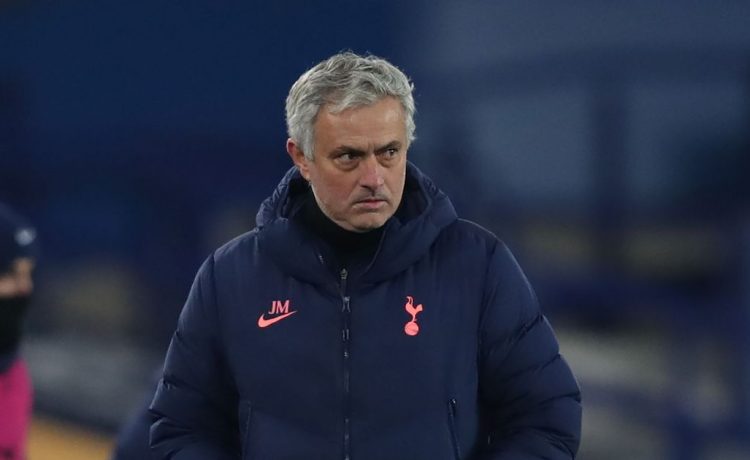 Jose Mourinho was fuming with his Tottenham side’s ‘incredible’ mistakes during their pulsating FA Cup defeat to Everton.

And the Spurs boss was irritated by questions about Gareth Bale’s absence after the out-of-form forward was omitted from the squad for the Goodison Park clash.

Tottenham crashed out of the FA Cup after Bernard took advantage of sloppy defending to score a late, late winner in a 5-4 victory for Carlo Ancelotti’s Everton.

Afterwards Mourinho said his side had showed “great character” to twice haul themselves level after going two goals behind in the first half.

But he was unhappy with his side’s defending, saying: “Attacking football only wins matches when you don’t make more mistakes than you create.”

“When you score four goals, you have to win,” he told BBC Sport. “The way we played, we should win comfortably. Attacking football and defensive mistakes.

“The players gave everything. I have to admit for some of them it was not easy because you play so well and one, two, three mistakes and you’re losing 3-1.

Mourinho’s side had taken an early lead through Davinson Sanchez, but Everton took control with three goals in eight minutes from Dominic Calvert-Lewin, Richarlison and a Gylfi Sigurdsson penalty.

Erik Lamela pulled one back on the stroke of half-time before Sanchez scored again to restore parity.

Harry Kane came off the bench to score another equaliser after Richarlison had fired Everton back in front. But Bernard settled the tie in the seventh minute of injury time.

“But attacking football only wins matches when you don’t make more mistakes than you create. We scored four goals and it was not enough.

“We fought back again but had more mistakes. It was the mouse and the cat. The mouse was our mistakes and the cat was us trying to compensate for that.”

The Tottenham boss was asked after the game about Gareth Bale’s absence from the squad, and said: “Well I think it’s better for me to say. So we played against West Bromwich on the Sunday and he didn’t play.

“On Monday I was a little bit surprised by him wanting to have a scan because he was not comfortable with some muscular area.

“So he didn’t train on Monday and then on Tuesday he trained with the team but I was informed that his desire would be to work with the sports science for a couple of days to strengthen that area where he’s not feeling comfortable. That’s the reason why he’s not here.”

Mourinho was asked if Bale’s problem was an injury that would keep him out of Tottenham’s trip to face Premier League leaders Manchester City on Saturday.

“I don’t think it is an obvious clear injury,” the manager said.

“I would says he feels uncomfortable and because of that the training session he couldn’t be 100 percent, but I don’t think we can speak about an injury.”

Mourinho was asked whether he would want Bale to play despite his discomfort, and seemed irked by the line of questioning.

“Sorry, this is Everton match press conference and Gareth was not here, and the only thing I can say about Gareth was the question that I was asked and I wanted to make it very clear the situation which I’m being completely open and honest about.”