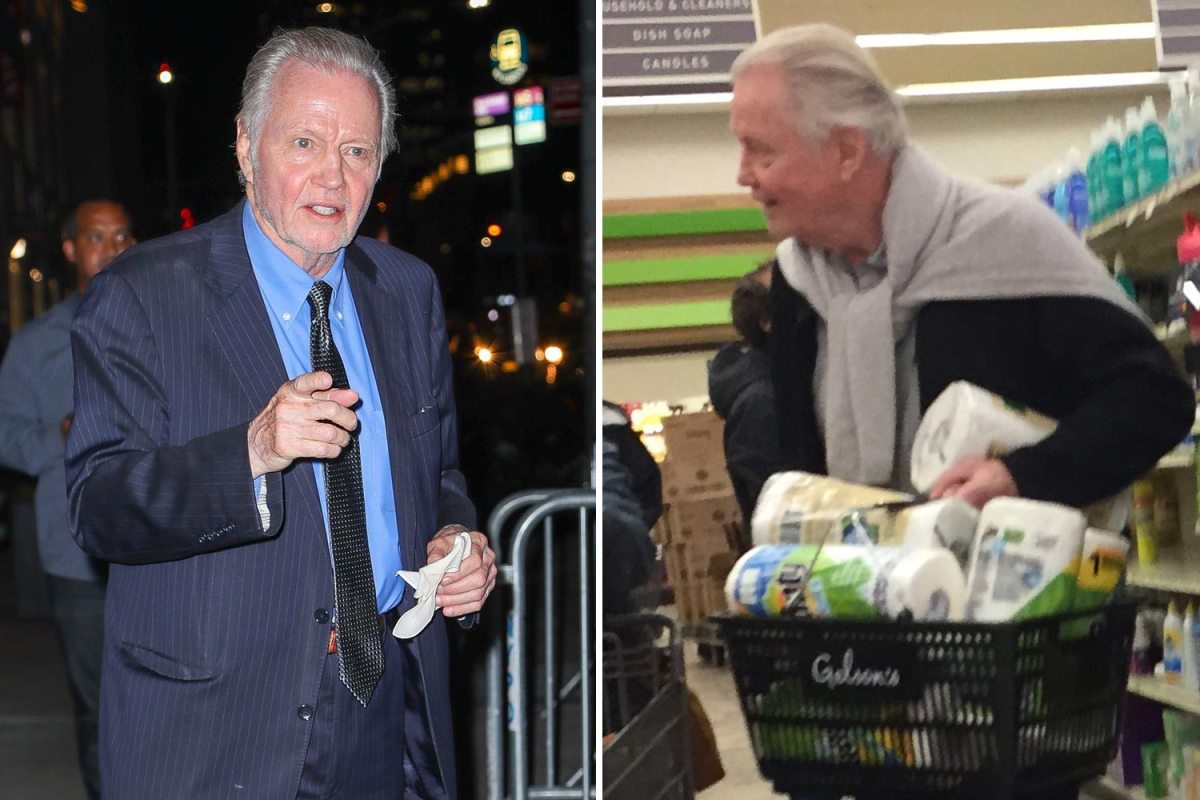 Not even Oscar winners are immune to panic buying essentials amidst the coronavirus epidemic, as Jon Voight buys up big at his local supermarket.

The Ray Donovan actor, 81, was spotted loading up on paper towels at his local Gelson’s supermarket in Sherman Oaks, California.

Jon is one of many thousands of people who continue to stockpile necessities such as toilet paper, non-perishable food and medicines in fear they may have to go into weeks long quarantine due to the virus.
Angelina Jolie’s father seemed to be in a good mood as he loaded up his shopping basket and waited in the checkout line behind other shoppers.
He is one of many celebrities who have been caught out running low on essential supplies and joins the likes of Tori Spelling, Vicki Gunvalson and Bachelor star Matty J Johnson in needing to replenish their shopping.

Jon – a major Trump supporter – is in one of the high risk categories for the coronavirus, with 14.8% of people who have died after contracting it over the age of 80, according to a study from the Chinese Center for Disease Control and Prevention.
In the UK, the government is even considering whether forcing people aged over 70 to self-isolate for up to four months to prevent catching the deadly virus.
Scotland’s chief medical officer, Dr Catherine Calderwood, has recommended people in that age group reduced their social contact by about 75%.
“That will mean though that they probably will increase their family contacts or close friend contacts, who would be able to bring them food, and also prescriptions if they needed that, take them to hospital appointments,” she told the BBC.

Panic surrounding coronavirus has increased this week after President Donald Trump declared a national emergency in a bid to slow the spread of the virus.
He also extended the travel ban to the UK and Ireland, after earlier banning all incoming passengers from Europe after the World Health Organisation (WHO) labelled coronavirus a pandemic.
The US now has 3,244 confirmed cases of coronavirus, as the death toll there jumps to 61.
This afternoon New York City Mayor Bill de Blasio announced the city will close all of its public schools until April in a bid to slow the spread of coronavirus.

shout out to my ex

baby on the way

Heading into self-isolation should not be a problem for The Midnight Cowboy actor who recently got a lot more spare time now that Showtime has axed Ray Donovan after its seventh season.
The actor who won an Oscar in 1979 for his leading role in Coming Home has wrapped on the remake of Roe v. Wade and will soon head into production on Reagan, a biopic about the life of the late US president.
Voight was married to actress Marcheline Bertand for nine years until 1980 and the pair had two children together, Angelina, 44, and James Haven, 46.