JoJo Siwa just couldn’t stop smiling as she left rehearsals for Dancing With The Stars.

The Dance Moms star, 18, will make history as part of the first same-sex couple on the talent show in 30 seasons.

As the YouTube personality left training, she caught a quick kiss from her girlfriend, who she recently called ‘the absolute best girlfriend in the entire world’ in a gushing Instagram post to celebrate National Girlfriend Day.

Looking effortlessly cool in a blue and red striped shirt, grey joggers and Converse, the singer cuddled up to her belle, Kylie Prew, in the parking lot as she left the Hollywood studio.

The star, who came out as gay earlier this year, also wore her signature ponytail and carried an epic furry green backpack, which certainly made her stand out from the crowd.

JoJo will compete for the coveted mirrorball trophy on the dance show, admitting she’s ‘so excited’ to be dancing with a girl.

Speaking to Variety, she said: ‘It’s really special that not only now do I get to share with the world that you get to love who you want to love, but also you get to dance with whom you want to dance.’

‘There’s a lot of barriers that we’re going to have to break through, who leads, how do you dress, what shoes do you wear? But I think it’s all something that I’m looking forward to,’ she continued.

Wanting to use her platform for good, JoJo expressed that she ‘wants to make everything okay’ for those who come after her.

Dancing With The Stars returns September 20.


MORE : Love Island’s Brett Staniland speaks up for LGBT community after being targeted by homophobic trolls: ‘Calling me gay will never offend me’


MORE : Lance Bass really wants to host an LGBT season of The Bachelor 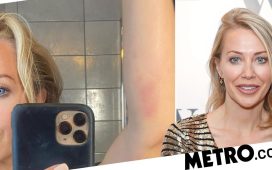