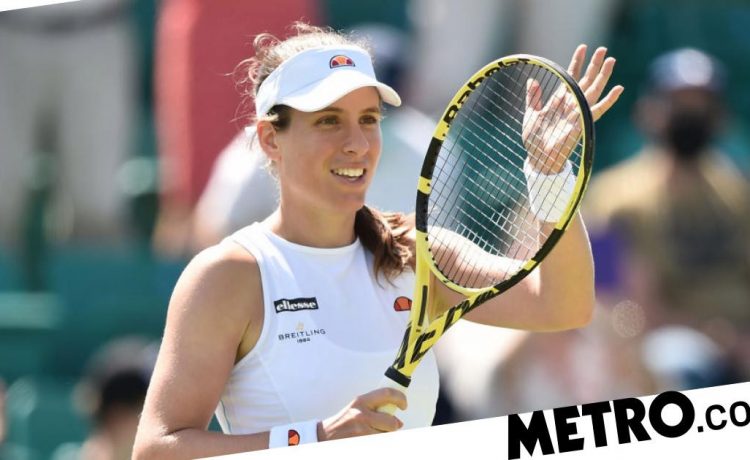 Johanna Konta has been forced to withdraw from this summer’s Tokyo Olympics after she contracted COVID-19 and her preparations for the Games were badly disrupted as a result.

The 30-year-old had already been forced out of Wimbledon when one of her team tested positive for the virus, and she has confirmed that she then caught COVID-19 herself while self-isolating after that positive test.

Her preparations for Japan were then ruined and she does not feel ready enough to compete so has withdrawn.

Konta wrote in a statement on social media: ‘As some of you may know, I was unable to compete at Wimbledon this year after a member of my team tested positive for COVID-19.

‘Unfortunately, whilst self-isolating, I developed symptoms [of Covid-19] and subsequently tested positive for the virus.

‘As a result, I have been unable to train for the last two and a half weeks and sadly, this has put my body in a situation where I am unable to be fully ready in time for the Olympic Games in Tokyo.

‘This is a heart-breaking reality for me, as representing Team GB at the Olympic Games in Rio in 2016 is one of my most treasured memories from my career so far.

‘I’ll do my best to get myself back to full health and fitness and ready to be competing again soon.

‘During this time, I’ll also be glued to my TV cheering on my fellow Team GB athletes competing in Tokyo and I hope you will all join me.’

Konta’s experience with coronavirus has come at an unfortunate time as she won her first title in four years at the Nottingham Open shortly before Wimbledon and has not been able to compete since.

Konta’s withdrawal came on the same day as Roger Federer also pulling out of the event due to an ongoing knee problem.

‘During the grass court season I unfortunately suffered a setback with my knee and have accepted that I must withdraw from the Toyko Olympics,’ wrote Federer.

‘I am greatly disappointed, as it has been an honour and highlight of my career each time I have represented Switzerland.

‘I have already begun rehabilitation in the hopes of returning to the tour later this summer.

“I wish the entire Swiss team the best of luck and I will be rooting hard from afar. As always, Happ Schwiz!’


MORE : Johanna Konta breaks silence after being forced to withdraw from Wimbledon