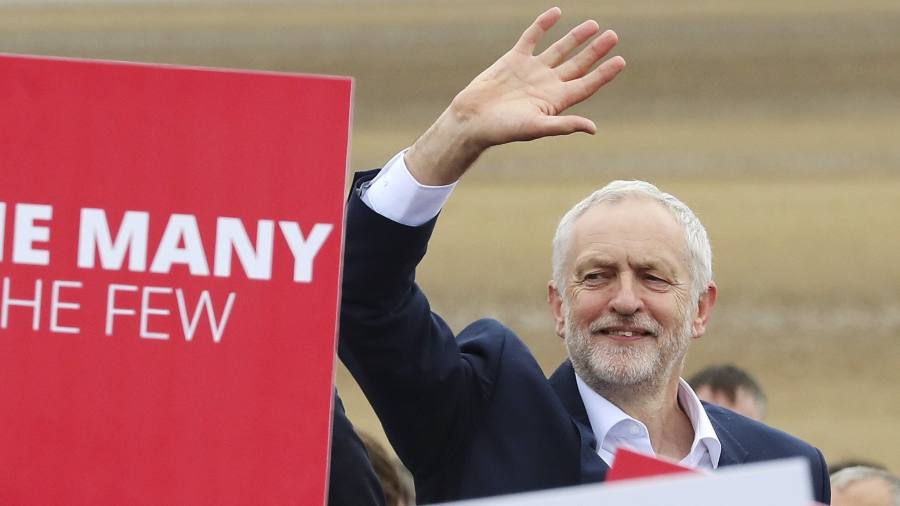 It’s been a surreal time. The threat came out of nowhere. It quickly torpedoed things that we once took for granted. But rest assured, it will end. On Saturday, Jeremy Corbyn’s tenure as leader of Britain’s Labour party finally expires. It’s been five years.

I struggle to pick a favourite moment.

Visually, it’s the time he tried to high-five shadow foreign secretary Emily Thornberry, and ended up clapping her breast.

Conceptually, I like the interview where he claimed to watch the Queen’s Speech on Christmas morning — that is, several hours before it is broadcast. I also like the morning after the Brexit vote, when he called for Article 50 to be invoked as soon as possible.

But for sheer timing, I’ll go for his response to coronavirus. “I do urge people, I really do: listen, listen, listen to the advice you’re given,” the 70-year-old said on national TV, before ignoring official advice that over-70s should stay home. Leadership.

Mr Corbyn’s supporters always claimed he could win a general election. And he won two — for the Tory party.

I don’t want to criticise his character or ideology. Quite the opposite. Let’s assume — as his supporters do — that he has unparalleled ethics and ideas. Doesn’t that make his failure to win office even greater?

He savaged former prime minister Tony Blair, thereby delegitimising the only elected Labour government most British people have known. He sat out the Brexit campaign, handing the right of the Tory party a huge victory. After offending the Jewish community, he tried to make amends by attending the one Passover seder, at a radical leftwing collective, where his presence was all but guaranteed to offend mainstream Jewish opinion.

After losing one election, he tried to win another by offering a more radical version of the same policies. Mr Corbyn faced a government that had suffered the biggest parliamentary defeats in history and brought the economy to the brink of recession. He still convinced the British public that there was a less competent alternative.

Imagine a burglar who finds a house, with the doors unlocked and the occupants busy beating each other senseless, and who not only manages to steal nothing but actually drops his own wallet on the way out. That is Mr Corbyn’s relationship to the Tory party.

With his departure, Labour has stopped drinking, but it is still a long way from becoming sober. The candidates to replace him have spoken of bringing the party together. Come on, it’s not post-apartheid South Africa.

You can’t bring the party together while reconnecting with the country — because the country doesn’t want to reconnect with Labour while it indulges Corbynite delusions. When YouGov asked the British public to give Mr Corbyn’s leadership a mark out of 10, nearly half gave him zero. And we are a nation famed for toning down what we think.

Only 6 per cent of voters have a very favourable view of Mr Corbyn. They all seem to be big in the Labour party or on Twitter. The wisdom of crowds is fine, but it loses to the idiocy of mobs.

No one is less aware of Mr Corbyn’s faults than himself. He recently hinted that he’d be interested in a position in the next shadow cabinet. There are stalkers who are quicker to realise it’s time to leave.

After coronavirus required huge state intervention, Mr Corbyn said his ideas had been proved “absolutely right”. Imagine having all the right arguments, and losing by a landslide. What could possibly have been the problem?

If Labour wants to find a hallowed place for Mr Corbyn, good luck to it. But the rest of us should remember him differently. The English language lacks a phrase that means the opposite of a hard act to follow. Jeremy Corbyn would make an excellent shorthand.

Monzo customers shut out of accounts in lockdown

Coronavirus: Jarrold store prepares to reopen after 12 weeks in lockdown