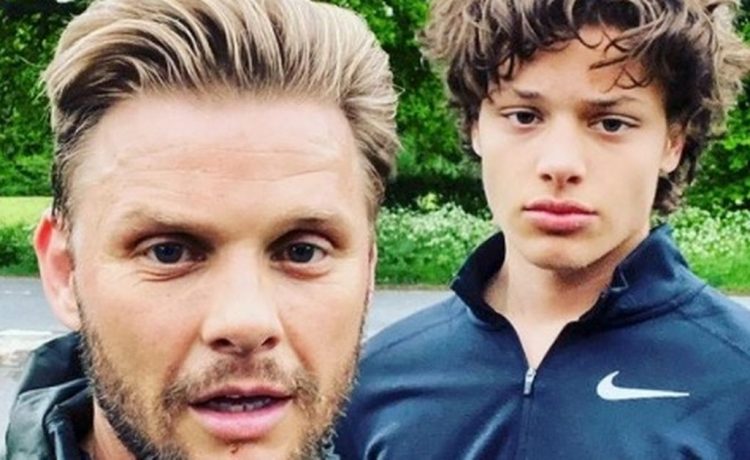 Jeff Brazier has discussed eldest son Bobby’s modelling career and his parental concerns about a future in the spotlight.

The television presenter, 41, is a father-of-two from his former relationship to late reality TV star Jade Goody.

Now, speaking to The Mirror to discuss his new podcast Jeff Brazier – Only Human, which focuses on the ever prevalent issue of mental health during these unprecedented times, Jeff also discussed how these times have impacted his children.

Ahead of the pandemic, eldest son Bobby Brazier, 17, had signed with Unsigned Group modelling agency and even walked on the runway for Dolce and Gabbana for Milan Fashion Week last year.

However, like many others, Bobby’s career ambitions were put somewhat on hold by the pandemic.

Jeff revealed: “He was gutted, because it was all falling into place.”

He continued: “That doesn’t mean to say that it won’t happen, sort of, after this.

“He’s had to deal with that question, you know, will it?

“So when I see him getting up at five o’clock, when I see him training twice a day when I see him, reading all the books that I’ve left laying around the house I didn’t think he’d ever be interested in, you realise that he’s really serious about his career, and he’s taking himself seriously.

“And he understands what it takes to make a success of something and we’re not just going to sort of hope or expect everything to fall on our lap.

Jeff reiterated that he knows his eldest son will be ready for when the industry gets closer to pre-Covid times again, but actually taking some time out to grow may be a good thing.

He noted: “Maybe that time, that self-development will mean that he does get a great opportunity and he’ll take it with both hands.”

Yet, as Bobby faces a career that will undoubtedly see him in the spotlight, Jeff recognises that he has concerns about what that can also bring.

When asked about these issues, Jeff answered: “Definitely, as this particular parent who obviously not only had his own difficult experiences but also can cite many occasions when when his mum went through the same.

“I think that I do enough worrying on behalf of both me and his mum when it comes to what he might be subject to.”

He later adds: “I just hope that everyone’s kind, I hope that he looks after himself and makes good decisions and has always been for him to be to have a skill and a talent to develop those things.”

Meanwhile, Jeff’s younger son Freddie, 15, has also faced difficulties as his apprenticeship at a barbers was also put on hold due to the pandemic.

He notes: “Again, really frustrating for Freddie because he was just about to start doing Saturdays for a barber and he knew already that he was going to be doing an apprenticeship there.

“So as soon as he finishes his exams he will be able to embark on that and he’s so excited that the barber is incredible and he’s really taking him under his wing.”

The presenter revealed he was pleased that Freddie is so certain of what he wants his career to be.

“Bobby didn’t know what he wanted to do…and I helped him by finding something for him and it lasted three months, whereas Freddie’s very set on being a barber.”

Jeff also reflects on the impact of lockdown when it comes to homeschooling and being cooped up at home together with the boys and his wife Kate Dwyer at their home in Essex.

The presenter reveals: “My experience has been, I think, that I’m fortunate enough, I’ve got [Bobby] who is quite happy to kind of be at home, who’s actually seized the opportunity to read self-development books to try and make sure that he’s in the best possible position.

“As soon as the pandemic ends and we’re allowed to go out and play and do whatever we want to do, he’ll be in a really good position to hit the ground running.

“So I haven’t needed to worry about Bobby so much.”

However, Freddie has not found the lockdown situation as easy.

“Freddie is literally like a caged animal and lockdowns and Freddie are not a natural marriage,” says Jeff. “And so I’ve had to really keep an eye on him, about to make sure that I dragged him out with me when it comes to getting that fresh air, and making sure that he spends time outside of the house is imperative.”

Jeff has made sure to keep the boys active but also let them enjoy television in their rooms – something he had previously been resistant too – as well as working on their own well-being.

“It’s just keeping an eye on the situation,” notes Jeff, “but also, and again, they won’t mind me saying this, because we’re an open family, but you know, we’ve all maintained our therapy, if you like, which again gives us an outlet that isn’t necessarily just people that are stuck indoors with.”

Addressing his mental health podcast, while Jeff recognises that mental health services in the country are “deprived” and the government aren’t providing all the answers, he hopes to focus on what people can control and help themselves with.

We can all do with a bit of that right now!

Jeff Brazier – Only Human is available to download every Tuesday from Apple Podcasts, Spotify, the Absolute Radio app, absoluteradio.co.uk, and all mainstream podcast providers.