Free Guy is currently playing in theaters, and the Ryan Reynolds action comedy comes jam packed with eye-popping visual effects. Some of those FX, including the “Street Squeeze” sequence, come courtesy of Scanline VFX.

ComingSoon was lucky enough to interview Laurent Taillefer, Associate VFX Supervisor at Scanline, who graciously discussed his company’s role on the blockbuster production.

What were some of the key scenes you worked on for Free Guy?

We focused mainly on three key sequences: “Badass Mansion”, where we designed and rendered the interior of the mansion; “Street Squeeze”, the sequence where the hero’s car is driving through compressing streets, and “Server Room”, with the building glitching and crumbling digitally as the servers get shut down.

In the VFX reel, one of the big sequences is the city crumbling action piece — how many people does it take to create a shot like this?

It takes a village! The Street Squeeze sequence had its own team on the 3D side, led by CG Supervisor Matthew Novak. We had half-a dozen asset artists build the city based on real-life scans and references of Boston, a Layout Team of 4 to build the path of the chase, 6-8 FX Artists to break it up, 4 lighters and half a dozen comp artists, with a few supervisors to help filter the very large amount of layers being passed across all these. Overall we worked with a team of 30 people. 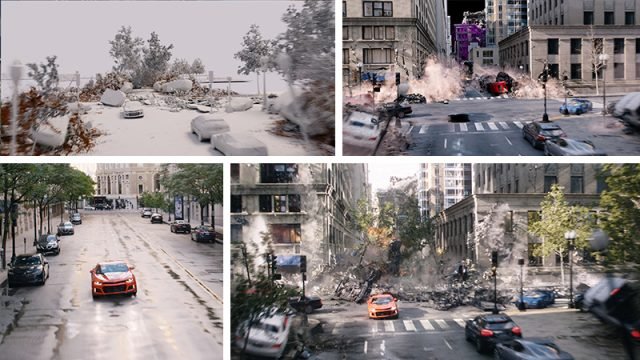 There are so many details in these big moments. How do you know how far to push the effect? In other words, is there such a thing as too little or too much detail?

It’s an iterative process. We start by selecting a few hero shots that represent the most angles (i.e. a very wide shot, a real close-up one, a travelling one), to develop our recipes. We render these in a very simple form with simple grey shaders and lighting effects in order to go through a lot of versions as fast as possible. We make this a collaborative process by sharing each significant step with the client so we can get early notes and avoid any last minute surprises. This also allows for the director to change the edit and cut to adapt to the timing and look of the effects, so it’s really a two-way conversation. Once the choreography of the FX is locked, we start to refine it by adding smaller details, such as dust, gravel, secondary destruction, etc. That’s when the question about when to stop becomes critical, as we need to stay on budget and schedule. Internally, we usually answer it by comparing the renders to real life examples, and checking if no components are missing to make our images of photographic quality.

The collaboration between the VFX Supervisor and myself is key here, as we can each bring a fresh pair of eyes to the work – As well as every other supervisor’s input. We also will submit our work to other Scanline supervisors every so often to get an unbiased feedback. So essentially, real world references and objective feedback are the answers.

On Free Guy, this process was made easier thanks to client feedback – As we had been able to establish a very early collaboration, and they responded really well to our work, the main note was mostly to “keep going”. So once we had a satisfactory version, we simply used the remaining schedule and budget to add extra details, until we met the deadline, each version out-wowing the previous. 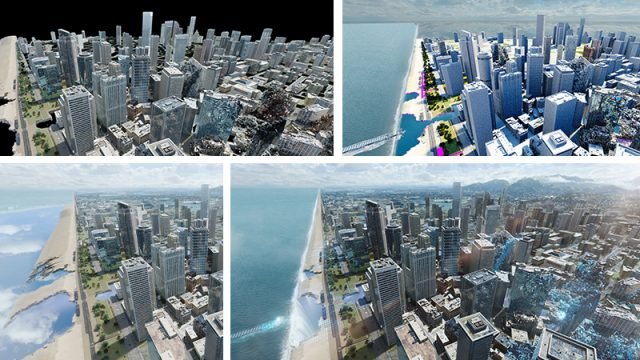 What made Free Guy unique compared to other projects you’ve worked on?

The collaboration with the client was outstanding. We were able to establish a very friendly and constructive relationship, so the notes were almost always encouraging and positive, bringing a very good atmosphere to the show. The team had a great time working together, with very limited delivery rush periods.

The most unique thing about this project was something different, though. The COVID crisis hit as we were in the first third of the production. While many projects were being put on hold, we were lucky enough that the shoot had wrapped, and we had all the material and support to continue working. In these insecure times, we had to adapt our workflow to remote work, having to deal with a client equally affected. Thanks to solid support from the Scanline facilities team and a very understanding client, we were able to transition in a very smooth way, and continue to work on this very positive project, which really helped navigating through the insecurities of last year.

Is there a shot/detail/moment that your team worked on that you’re particularly proud of in Free Guy?

That’s a tough question – Like asking a parent for their favorite child. All sequences had technical and creative challenges, which were all met with great efficiency by the team.

I’d say the tight collaboration between our modeling, layout and effects team allowing the Street Squeeze sequence to take place in a real-world scale environment was one of the biggest feats. You have a very high fidelity simulation, down to the smallest pebble, taking place in a fully built city, allowing for immense flexibility. Seeing that setup come together and work seamlessly was a great satisfaction.

Was there new technology or software you employed for Free Guy that you hadn’t used before?

Scanline has been integrating Houdini (and FX simulation software) to the pipeline, to complement the in-house Flowline fluid simulator technology. Adding a new piece of software in an FX production pipeline is always a big challenge, and doing it while running a show even more so. The FX team, under FX Supervisor Hannes Krieger’s supervision, once again did wonders, and we were able to leverage the strengths of both software together by the end of the show.

Do you have any upcoming projects?

Is The Batman Adapting Hush?

‘My life in the mafia’s shadow’: Italy’s most hunted author, Roberto Saviano