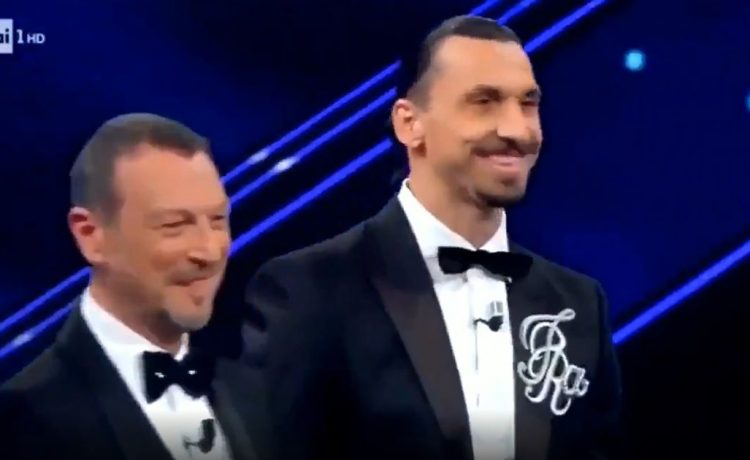 Zlatan Ibrahimovic has clashed with Romelu Lukaku and LeBron James in the last month. But instead of preparing for a showdown with his former club Manchester United in the Europa League next week, the injured Milan striker is cosying up to TV and music stars as the guest presenter at Italy’s biggest musical festival – and making jokes about Liverpool.

The verb “zlatanera” – to dominate – is now in the Swedish dictionary. And even when he is not on the football pitch, the Swedish superstar still manages to get top billing and command the stage in his adopted country.

Ibrahimovic’s return to Serie A has been extraordinary since his “homecoming” in January 2020. After two years of apparent semi-retirement at LA Galaxy, the 39-year-old has scored 24 goals in 32 league matches to rejuvenate Milan – and the whole league.

And of course Ibrahimovic has created controversy. He had to insist he was not racist after his head-to-head confrontation with his former Manchester United team-mate Lukaku during the Milan derby.

Then Ibrahimovic was slapped down by NBA star James after the Swede claimed sports stars should not get involved in politics. The LA Lakers responded by taking to social media to say: “There is no way I will ever just stick to sports because I understand this platform and how powerful my voice is. I speak from a very educated mind.

On arriving in Sanremo on the Italian Riviera this week, Ibrahimovic restated his criticism of James and offered an invite to attend and an olive branch to Lukaku. But the real story is what he is doing earning €50,000 a night at the Sanremo Music Festival – which is like an Italian Eurovision Song Contest – in the middle of the football season.

The Swede agreed the deal with host broadcaster RAI – the Italian BBC – in August last year before he had finalised a contract extension with Milan. It was confirmed he would still take the gig in December when the Rossoneri were top of Serie A. Since then they have lost four games, including to Cristiano Ronaldo’s Juventus, to fall behind leaders Inter – and have also been knocked out of the Copa Italia by their cross-city rivals.

The noise over his appearance at a song contest has quietened since he suffered a groin strain in Sunday’s win at Roma which is set to rule him out for four games – starting with tonight’s game with Udinese. He will be at the San Siro to watch tonight and hopes to return on the pitch for the second leg at the San Siro with United on March 18. But instead of a full rehab programme to get ready for Milan, the former Juventus and Inter Milan striker announced he wanted to “give a lot to Italy for what it has given me, for so many years” by still presenting the show.

Zlatan, who insisted he had just “a small injury”, said before his debut on Tuesday night:

“If I make a mistake, no one can judge me, and if I do well, even better, then I’ll have another job for when I stop”.

Then Ibrahimovic, who turns 40 in October, walked on stage last night to declare: “It is an honour to be here, but also an honour for you to have me here.”

He then joked he wanted to change the rules of the competition which has run since 1951 and seen Stevie Wonder and Shirley Bassey appear as guests.

“First of all, there will be 22 singers in the competition, 11 against 11, otherwise it’s not right,” said the Swede. “Seeing as there are 26, sell four of the singers, I hear Liverpool are looking for players. If not, put them in the garden and I’ll get them working.

“The second rule is about the stage. It’s too small, made for small people like you. I need the stage to be 105 metres by 68 metres, like the pitch at San Siro.

“No stress, don’t worry, as long as Zlatan is here, everything will be fine. Zlatan’s Festival lasts 90 minutes plus stoppages.

“I have been the best on this stage. Not just tonight, but of all time.”

In an extraordinary week even by his standards, Ibrahimovic also plans to sing a duet with Bologna coach Sinisa Mihajlovic. “I hope he doesn’t know how to sing, so we’ll be on the same level,” he laughed.