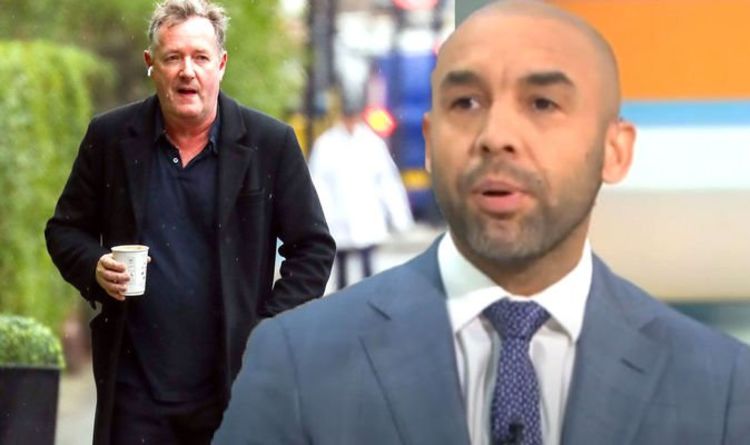 Alex Beresford, 40, has today admitted he “didn’t want” Piers Morgan, 55 to quit his job on Good Morning Britain, following their row on Tuesday morning’s show over Meghan Markle’s mental wellbeing. The GMB weatherman has now issued a statement for the first time, addressing the heated debate between him and the former Britain’s Got Talent judge in view of his 239,000 followers.

In his statement, Alex said: “Over the last few years, Piers and I have had a lively, cheeky on-air relationship.

“We both wanted to be on the show Tuesday morning, and from our very public conversations on Twitter, we both knew how strongly our opinions differed on the treatment of Harry and Meghan pre and post the interview that has split the world.”

The TV star continued: “I hoped we could reach a place of understanding. It’s sad that we weren’t able to get there, but challenging his opinion was not an outrage. On this occasion, we have to agree to disagree.

Another replied: “Personally, I back you 100 per cent for what you did.”

A third commented: “You were calm and dignified when you made your points. You’re completely right in what you said – he sat there spouting his opinions not letting anyone else say a word. He just didn’t want to listen to anyone else but himself.”

However, others were less approving, as they felt Alex had deliberately antagonised Piers to get an angered response.

A fourth typed: “You hung him out to dry, Piers was the one person on TV who challenged what is wrong with this world, on behalf of us ordinary people.”

A fifth said: “This was disappointing from you in what was otherwise a great display of what discussion can look like. I don’t know if there was some underlying tension or this was for clout with a certain crowd but you went from making points to just trying to bait him. For ratings? Hope not.”